Welcome Back! This week we’re going to look at the history of samplers. What exactly is a sampler? Well, in the early 18th century it became common for needlework pieces that were signed and dated to be called a “sampler”. Pieces that did not have those elements were regarded as “needlework pictures”. Most information says that a sampler is exactly what the name implies, a piece of linen that was used like a scrap book where the stitcher could store new stitches and motifs to keep as a reference for future work. In the 1600’s, stitching samplers became very popular, particularly in New England. 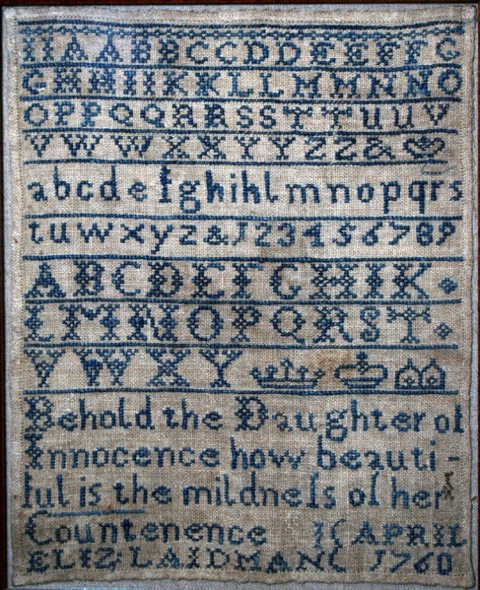 Apparently, New England is responible for the style of sampler we are most familiar with today, Until the early 1700’s, samplers tended to include alphabets and very simple borders. The Pennsylvania samplers we see from this period start to include heavily decorative borders, animals, plants like the “Tree of Life” image and scripture passages. 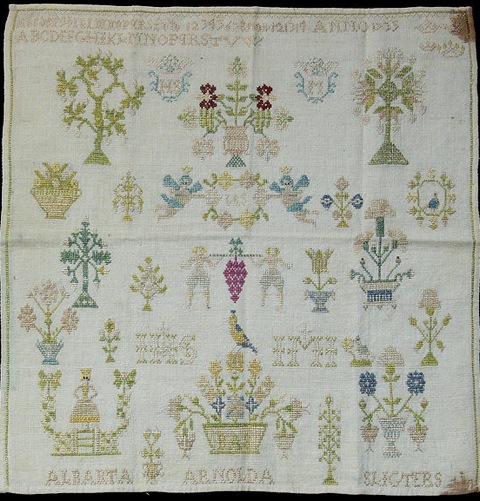 I’ve read conflicting information that perhaps sampler stitching wasn’t as popular as we’re typically lead to believe, as fabric was precious and would not be used for something so impractical. However, the dominating opion is that this was not the case. Usually a girl’s education would include stitching a sampler, whether she was home schooled or enrolled, usually in a Dame School. In many communities the women would spin flax for linen which would be woven by men on narrow looms. Most of the samplers we see from this era are long and narrow. The inclusion of the maker’s name, occasionally parent’s names, alphabets and numbers as well as ecclesiastical motifs speaks to me of skill building. Not only were these girls learning their numbers, letters, and religious lessons, but also household skills like spinning, sewing, mending and so forth. This evidence dismisses the “impractical” argument for me. 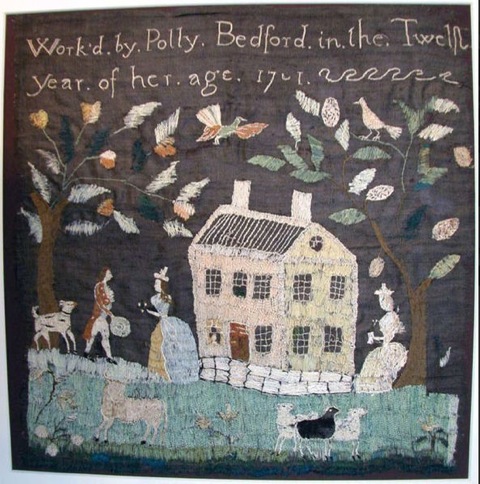 Interestingly, the examples of samplers we have from girls that were stitching these in school tend to be more commercial looking. Usually there was an established pattern the teacher would have the students use, almost like a coloring book. The examples we have from girls that were home schooled tend to be more personal and contain a wilder mishmash of motifs, including representations of their homes and personal statements. 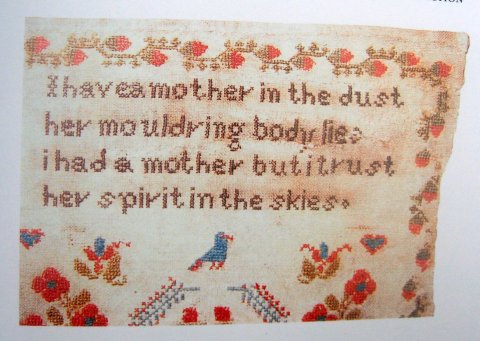 When I came across this piece, it struck me as strange. At first glance it might appear morbid but I have found many other examples of this kind of sentiment stitched into samplers, especially in the Pennsylvania German community in the 1700’s. One bit of text read, “Katherine Meck is my name for you to see when I am dead and laid in my grave and all my bones are rotten. Here is my name for you to see that I am not forgotten.” 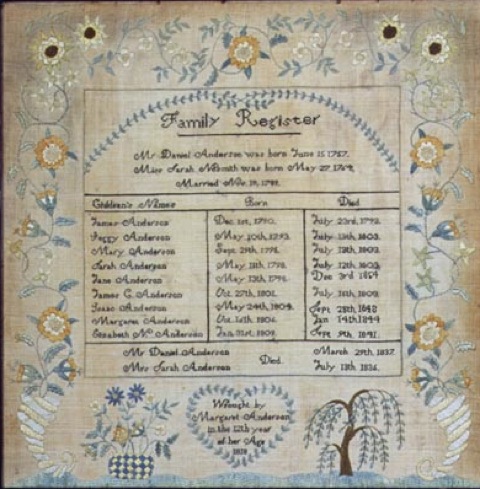 In the mid 1800’s we begin to see traditional samplers waning. Perhaps it’s because girls’ education was starting to include subjects outside of the domestic arts and samplers were no longer part of their primary schooling. Cheap cotton production over homespun linen may have also encouraged the trend. It’s interesting to note that around this time we begin to see more family tree style of samplers that list birth, death and marriage records. In concert with family bibles, these samplers mapped the family’s genealogy.

In two weeks we’ll look at contemporary artists who have modernized the sampler. I’ve been digging through the Phat Quarter flickr pool and I’ve found some treasures!

References for this article include The Illustrated History of Textiles edited by Madeleine Ginsburg, Needlework as Art by Lady M. Alford, and Embroidered Textiles by Sheila Paine.

I also found a lot of information for this article on iTunes. There is a section of the iTunes store called “iTunes U” that has FREE lectures on almost any topic you can think of from universities all over the U.S. and Europe. I would highly recommend  going there and watching the lecture “Pennsylvania German Women: Their Textile Traditions” for more info on early American samplers. It’s free! FREE!