In this article I look at the largely ‘Unfair Trade’ in textiles. The subject is too big an issue to discuss fully here yet recently three events have raised some interesting questions about our relationship with clothing and the link between production and consumption in terms of history, environment and human rights.

The Fashioned by Nature exhibition at the Victoria and Albert Museum explores the complex relationship between fashion and nature from 1600 to the present day (on until 29 January 2019)
On entry your look at how some exquisite examples of hand embroidery take their inspiration from the natural world and indeed, in subject, reflect how they were being influenced by flora and fauna beyond theses shores as the rich detailing of this waistcoat which includes  exotic plants and monkeys reveals. 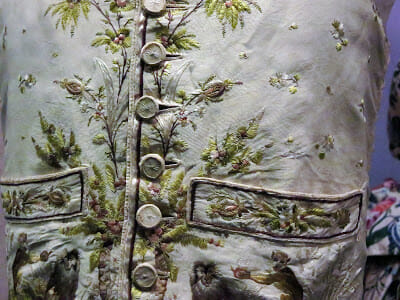 Split across two floors thought provoking displays invite visitors to consider how we have used resources and materials for the creation of fashionable garments On entry, historical examples cover a range of historic items and processes which include the complexities and dangers of the dyeing industry (which you could replace with ‘dying’ in some cases). How industrialisation and mass production created both health problems particularly in the cotton industry and led to the current crisis we have surrounding issues of sustainability, the environment and ‘fast fashion’. 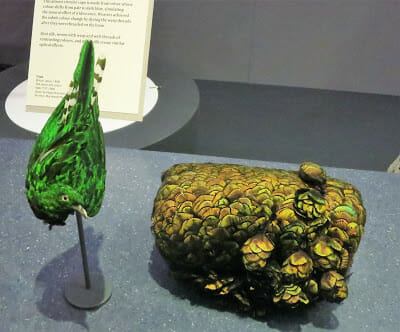 Fashion over time has always led to some issues surrounding ethical use of materials and resources, dresses decorated with beetle wings, whalebone corsets. The attraction to using feathers or whole birds gave rise to the founding of the RSPB in protest. The organisation started life as the Society for the Protection of Birds (SPB), founded by Emily Williamson at her home in Manchester in 1889. The group quickly gained popularity and in 1891 it merged with the Fur, Fin and Feather Folk, to form a larger and stronger SPB, based in London.

The display contains interesting factual information and statistics. The discussion about the impact on the environment regarding ‘natural v synthetic’ has always been open to debate: 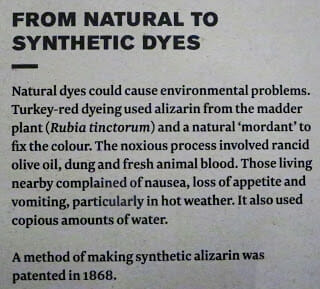 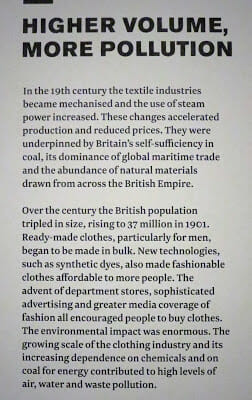 The upper floor looks at the development of new products and discusses the ethics of re-use and a relationship to a sustainable future.

“The uncomfortable truth is that because fashion is indeed ‘made from nature’, its current industrial practices gobble up staggering quantities of water, chemicals and fossil fuels, degrading the land and the diversity of nature’s species while belching out 1.9 billion tonnes of waste per year.”
Dilys Williams, Director of the Centre for Sustainable Fashion; Professor of Fashion Design for Sustainability, London College of Fashion 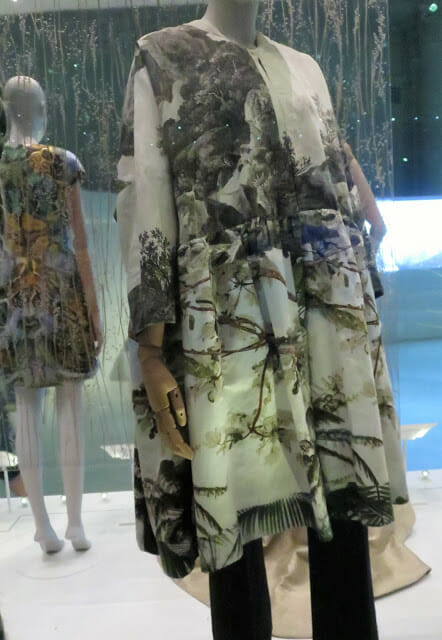 Dries Van Notan…the shirt I would most like to own.

It is well worth a visit before it closes early next year and if you every needed further reason to buy less new things, look at re-using and re-modelling what you already have, or simply visiting a charity shop to buy what some people seem to readily dispose of, then Stacey Dooley’s recent BBC documentary, Fashion’s Dirty Secrets, on 8th October 2018 may convince you. This thought-provoking documenting sheds light on the damage our fashion buying habits, (discussed in an article in 2015 by Marc Bain) are having on the environment with the fashion industry being one of the biggest polluters, only beaten to the top spot by oil (as claimed in the documentary). The production of cotton raised some of the most frightening concerns with reference to pollution and environmental impact. Aside from the chemicals used in production and dyeing (and the high impact they had on the local environments) one of the most frightening statistics is the fact that 20,000 litres of drinking water is used in the production of our most popular t-shirts and jeans. The Aral Sea, the size of the Republic of Ireland, once a thriving fishing region is now largely desert. (Stacey is filmed in a jeep travelling in a desert, the driver reveals that for three hours they have been driving in an area which was once the sea).

As textile artists we can comment and make our voices heard about some of these issues. This is exactly what the artist Heidi Drahota sought to do in her proposal for an exhibition, ‘Stuff for Thought’
Stuff for Thought was a shared project of with the Human Rights Office of the City of Nuremberg where it was first shown in September 2016. Its final showing was at the Festival of Quilts, UK in 2018.

The exhibition was devised in response to the awarding of the Nuremberg International Human Rights Award 2015 to labour unionist Amirul Haque Amin who represented the textile industry in Bangladesh. This was the first time an award was given to an activist for social and economic human rights in relation to two articles from the Universal Declaration of Human Rights: 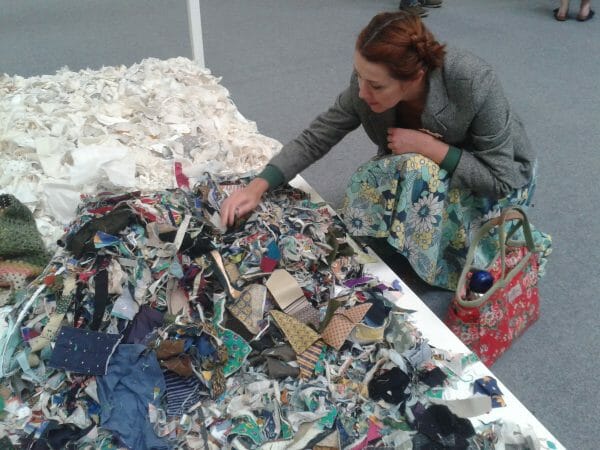 And some of the work:

My grandmother, a Romany Gypsy, taught me to look at the world and to take responsibility for what we do and how we work. The piece I exhibited uses cloth, papers and printing blocks gathered on a research trip to India. Onto these I stitched images made on location at railway station, at a festival and on a workplace rooftop. All people need access to light, good water and fresh air.

This article may have turned out to be ‘too preachy’ but considering the Japanese term ‘Montainai’ ( too good to waste) maybe we need to revise our attitude to our clothing and as consumers demand that new cloth is made from sustainable sources, not adding to land fill and demanding as much from the land as it does from the makers.

Cas Holmes is an award winning artist based in Kent. She graduated in Fine Arts from University College of Creative Arts, followed by research into paper-making and textiles in Japan.Renowned for her use of 'the found', she is the author of four books* for Batsford, including her most recent ‘Textile Landscape:Painting with Cloth in Mixed Media which takes an eclectic view on how different places, everyday subjects and the landscape we live in, can inform your textile work Interested in the connections between land, place and environment, the stories and imagery to be found in collected materials and observations are a constant source for inspiration in her projects and collaborations. She travels, teaches and exhibits internationally for different organisations and charities Since 2005 she has run courses for the Edward James Foundation at West Dean College where she was also resident artist. Her many-layered, atmospheric pieces are collected and commissioned internationally including pieces held by the Museum of Art and Design New York, the Embroiderer's Guild UK and the Garden Museum, London. For further information see: www.casholmes.co.uk.