In part 1, I looked at Medieval, Tudor and Renaissance appliqué. I’m now jumping forward a little to 19th and 20th century examples, as well as some contemporary textile artists and designers who use some of the many variations of appliqué.

One of the most exuberant and innovative uses of appliqué are Regency evening dresses. The very luxurious examples, owned and worn by the most wealthy, are decorated with trailing vines, stuffed grapes, raised flowers and an endless variety of decorative detailing. There seems no end to the creativity of the dressmakers who produced them, perhaps in reaction to the rather simple, minimally-decorated dresses of the earlier 19th century, when white muslin with Indian embroidery was the height of fashion. The styles hark back to the 18th century, when silk gowns were sometimes decorated with applied ruffles, pleats and swirls of self-fabric trim.

As the 19th century wore on, this kind of heavily-textured appliqué fell out of favour for clothing, replaced by pleats, frills, applied braids and fringing. Passementerie really took off and displaced applied fabric as a trimming.

In the world of domestic textiles, gorgeous appliqué quilts, coverlets and panels were made in the 19th century using mass-produced printed cottons, much like those still beloved by quilters and the tradition continued in America, where many beautiful examples of appliqué quilts survive. There’s also a fine tradition of quilts made from appliquéd felt.

Appliqué techniques reappear on garments around 1900 when highly-decorative appliqué is used to create large areas of pattern on garments. This 1901 Italian wedding dress in the Metropolitan Museum of Art has a skirt decorated with reverse appliqué of wool on silk. The two fabrics as layered together, the design stitched through both and the top layer cut away in parts.

In the teens and 1920s Parisian couturier Paul Poiret excelled in fabulous applied decoration on his ground-breaking designs. This coat using finely-cut leather is one of my favourite pieces ever and inspired my own leather-appliqué coat (though hardly as impressive!).

The 1920s saw another flurry of appliqué in fashion. As well as beading, evening gowns might also be decorated with embroidery or appliqué, often in bold, floral designs and abstract patterns.

Appliqué was often used for the most-expensive lingerie in the 1930s and there is a beautiful nightgown in the V&A collection using shadow appliqué where a coloured fabric is applied on the reverse of a light fabric. These delicate garments were often made by seamstresses working in their own homes, including my own grandmother who made luxury lingerie for Liberty. Techniques for delicate appliqué were also included in women’s magazines of the period and books were published showing how to create contemporary designs for clothing and home ware, such as my favourite by Kathleen Mann.

The brilliant Elsa Schiaparelli used appliqué on her surrealist-inspired garments. Other couturiers of the 1930s used appliqué extensively including Lanvin for this dress of around 1935.

Meanwhile in the world of textiles, in the 1920s and 1930s, embroiderer Rebecca Crompton brought appliqué to the forefront of art textiles, along with experimental, and still-influential, embroidery techniques.

Her style was continued by Constance Howard, another big name in embroidery design and education in the middle of the 20th century.

Couturiers continued to use appliqué techniques to decorate garments throughout the 20th century and the trend shows no sign of disappearing from the catwalks. Cheap production in Asia now allows appliqué to be seen on high street clothing too, as well as cushions and homewares. My Pinterest board on appliqué has some examples of techniques that I find exciting and interesting. 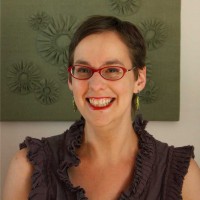 Ruth Singer creates detailed and intriguing textile artworks inspired by historical textiles, museum objects, personal heritage, memory and stories. She uses natural and recycled textiles combined with hand stitching as well as fabric manipulation techniques to create detailed surface texture. She also writes books on textiles and sewing and teaches in her own studio as well as freelance.