Welcome to eMbroidery, a series of interviews with male embroiderers. This month, Aubrey Longley-Cook. 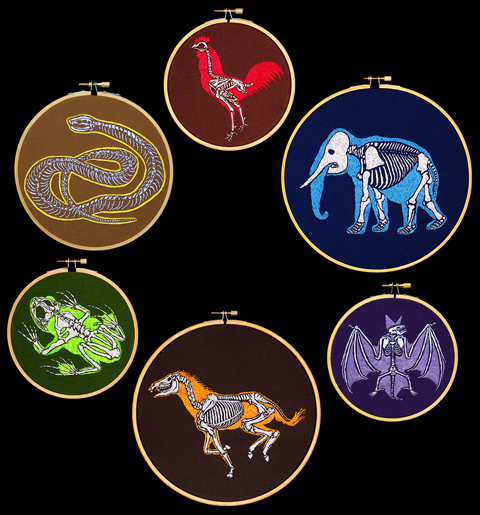 Main embroidery medium:  I mainly just draw with thread.  I usually don’t use traditional stitches or techniques, but I’ve been getting into cross stitch lately.

Noteworthy projects or pieces:  I was recently commissioned to cross stitch the cover of Atlanta Magazine’s November Issue.  The animations and hoops from my piece Runaway were warmly received. 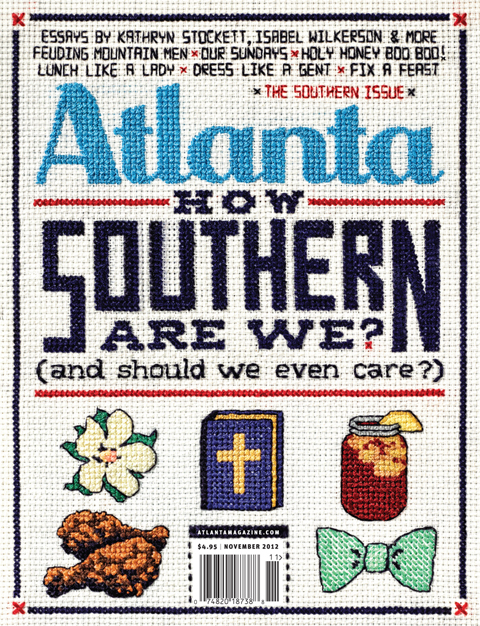 How did you come to be an embroiderer? I began to embroider after losing my mother to cancer in 2001.  She had worked in needlepoint during my childhood, and taking up the craft allowed me a way to continue to connect with her. 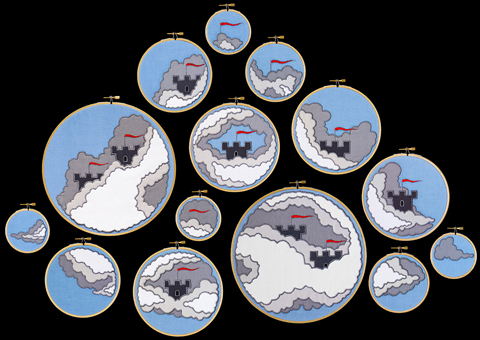 How do people respond to you as a male embroiderer?  I got a lot of interesting feedback when I first began stitching.  People’s reactions differed, but the responses did add a certain amount of shock value to my work.  As my skill level improved, I began to see my work speak for itself and become more about the ideas behind the work and less about my gender.  That being said I enjoy working in a traditionally female art form.  My embroideries often plays with queer identity and gender roles, and I like that there’s an undercurrent of those themes in male fiber work.

Who inspires you?  I am currently in love with the work of Argentine artists Chiachio & Giannone.  Their work is exceptional, and I am deeply inspired by their use of color.  I also love the work of William Schaff, Full Mano, Richard Saja, Stacey Page, Luke Haynes, Lauren DiCioccio, Shannon Genova-Scudder, Jo Hamilton, and Carol Hummel.

How or where did you learn how to stitch or sew?  I taught myself to stitch when I was 19.  I was in school at the Rhode Island School of Design at the time, and my embroideries began as a creative outlet for personal work outside of the animation curriculum.  I graduated with a BFA in Film/Animation/Video, and luckily was able to take some classes in the textiles department while in school. 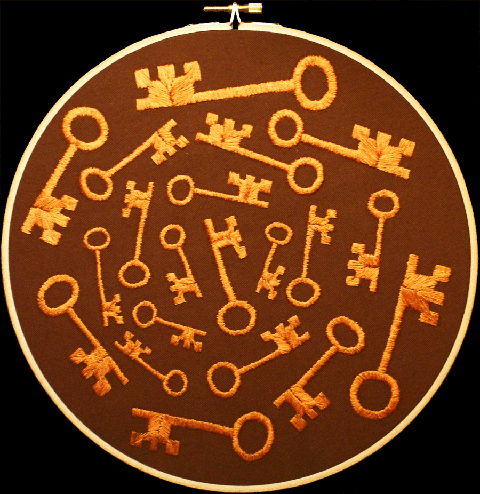 Are your current images new ones or have you used them before?  While my work plays a lot with repetition, I rarely duplicate a piece once it’s finished.  Since embroidery is so time intensive, I like to keep imagery fresh to differentiate projects and shows.  That being said, there are some images that I wouldn’t mind revisiting at some point.

How has your life shaped or influenced your work?  I lost my mother and came out of the closet when I was 15 years old.  Both events were huge influences on me during a transitional period in my life. The combination of personal loss and growth during that time affected me greatly.  My mother was an avid lover of the arts, and I began spending a lot of my time in high school in the art studio.  It was a place where I could work through my grief while also learning to express myself through the process of creation.

What are or were some of the strongest currents from your influences you had to absorb before you understood your own work?  I take a lot of inspiration from internet .GIF culture along with traditional hand drawn animation.  Animator Jules Engel’s Accident, was a huge inspiration for me and my piece Runaway.  Similar to the composition of Runaway, Jules uses the loop cycle of a greyhound running to create a narrative.  The imagery is created with graphite on paper, and as the loop progresses he begins to erase away the image.  The eraser marks are minor at first and distort the movement of the dog in beautiful bursts.  As he erases the dog completely, the viewer is left with a ghosting of the mark making, and the original motion is still visible.  His subtractive process is subtle, but through it he highlights the hand made nature of the work. 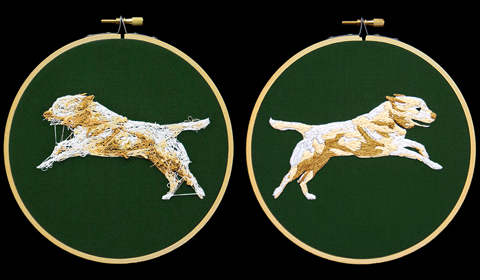 Do formal concerns, such as perspective and art history, interest you?  I find inspiration in art history, and think it is an important reference for all artists.  I also take quite a bit of inspiration from color theory.  Colors can bring emotion to a piece, and choosing my palette is one of the first things I do when I’m starting a new project.

What do your choice of images mean to you?  In my early work I found inspiration in using masculine imagery to contrast with the traditionally feminine art form.  I was drawn to creatures, skeletons, knights, and castles along with comic book and anime references.  I have departed from the need to force a male perspective into my work and currently take inspiration from documenting the world around me.  The Runaway animation is based on a video loop of my roommate’s dog Gus running.  Gus was a stray that we took in, and having a subject that I interacted with daily made the project much more personal.  Both the front and the back loops are living portraits of Gus, one showing his forward movement into the future and one a view into the chaos of his past.  This past year I began a new portrait series depicting drag queens of Atlanta.  Drag culture has had a recent resurgence, and Atlanta has an unique and rich history of drag.  I would like this series to be a documentation of the many faces of Atlanta queens, ultimately including a variety of different ages, ethnicities, and years of experience.  I am currently working on the 2nd frame of 9 for my first queen Lavonia Elberton.  The compositions are tight, focusing on the faces posing or “giving face” to the viewer.   Like with Runaway I plan on shooting both the front and back of the fabric.  There’s something intriguing about the rawness of the backside, and I think it will reflect on the people behind the paint.

Do you look at your work with an eye toward it like what can and can’t be visually quoted?  In other words what you will or won’t cut out?  I think all artists need to edit their own work.  It’s a natural process, and ultimately I focus on making a piece speak to viewers instead of allowing myself to get hung up on details.  There were actually originally 15 frames for the Runaway animation, but the motion was smoother without one of the frames.  While that hoop took at least a week to stitch, the motion was more fluid without it.  It’s common for animators to end up with quite a bit of work on the cutting room floor.  I suppose at this point I’m used to it and understand that mistakes are an essential part of the process.  Also mistakes make great gifts. 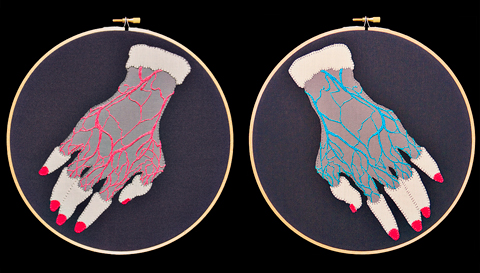 Do you have any secrets in your work you will tell us?  The secret’s in the sauce.  I eat a lot of BBQ.

How do you hope history treats your work? I like that embroidery has a history of having an heirloom quality.  I hope that work is preserved and appreciated.

Where can we find you and your work?  I live and work in Atlanta, GA.  Locally I have shown at Barbara Archer Gallery, MOCA GA, YoungBlood, MINT, Octane, the B-Complex, Sous Whisky Marin, the Plaza Theater, Eyedrum, and the Moog Gallery.  My work, news about upcoming shows, and contact info can be found at Spool Spectrum.  I also catalog lightning magic at Thundaga.