Welcome to eMbroidery, a series of interviews with male embroiderers. This month, Billy Kheel. 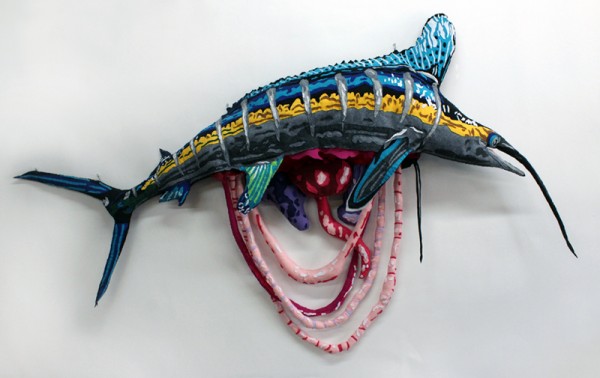 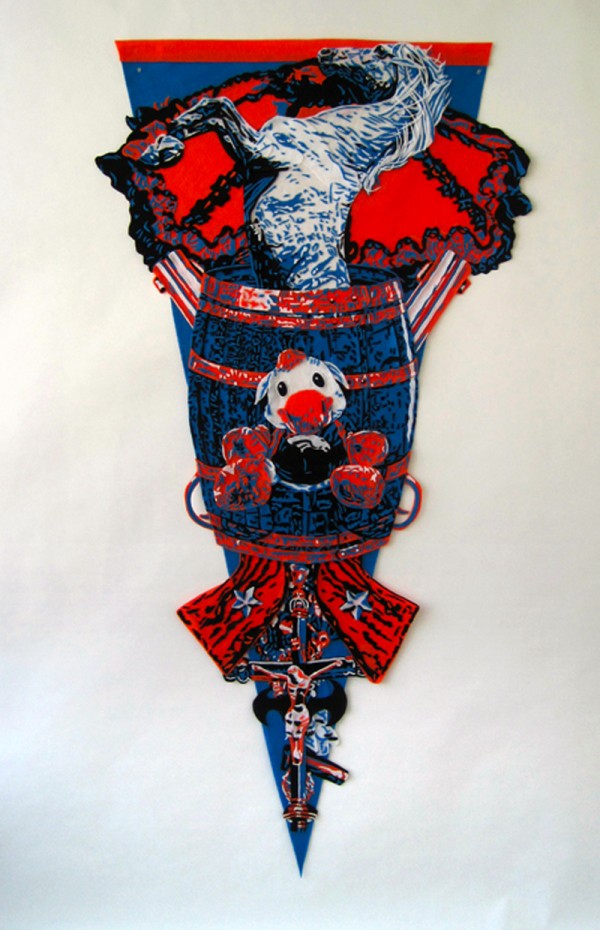 How did you come to be an embroiderer? I am trained as a painter but was looking for a way to connect my medium more directly with my personal history and interests. I am a sports fan and played football and lacrosse through high school and college (Go Wes!) so I started working with felt applique and embroidery as a medium that connects to my personal history through the materials used in sports memorabilia. Once I started using felt as a primary medium I became very interested in the processes involved in fabric arts and started to use more and more of them in my artwork.

What does it mean to you? For me using embroidery and applique techniques have shifting meanings depending on the project – which is what I like so much about it. The materials can evoke a return to handmade quality goods of yesteryear when used in a traditional manner, such as making pennants or banners. I like to subvert this nostalgic meaning with non-traditional subject matter. I also think there is a more uncomfortable meaning from the material when its used for something that it is not really meant for, like making realistic trophy fish or taxidermied animals. 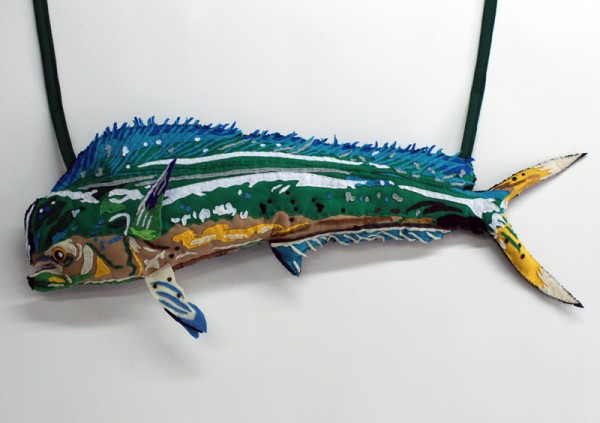 How do people respond to you as a male embroiderer? My first response was from an old football buddy who was visiting and saw me sewing something, and he asked “Are you knitting???” in sort of an uncomfortable way. That was when I knew I was on to something, because if it makes people uncomfortable its probably not boring. Since then responses have been all over the map, but people are usually surprised (I’m about six feet tall and weigh 225 lbs). My studiomate sometimes calls me Betsy Ross. 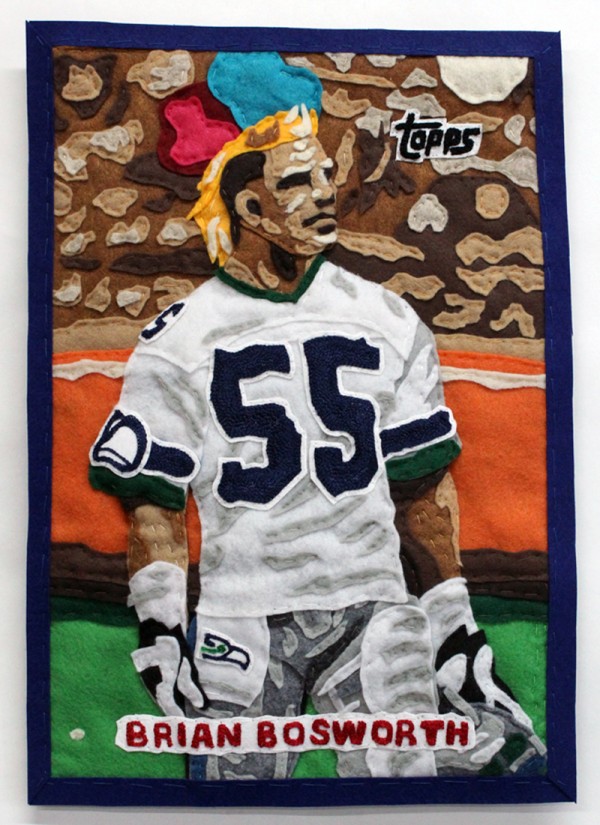 How or where did you learn you learn how to stitch or sew? I took a class at a place in LA called Blue Rooster on how to make plushies. I made a winged Ol E bottle plushie. After that I learned mostly from the internet and meeting other people that work with fabric.

Are your current images new ones or have you used them before? I am currently working on a series of sport fish and sports trading cards and both are new for me.

How has your life shaped or influenced your work? Besides my background in sports, there have been two other ways my life has influenced my work. First is that I had two kids and am inspired by working on projects with them. For example, I just made my newborn son a stuffed replica of Bruce Willis’s gun in Diehard that I think could lead to some artwork down the road. I am also planning on working with my daughter on a cape, which I think can also inspire some artwork. My work has also been influenced by my family history – we came to America as furriers and eventually had a clothing manufacturing company in the garment district of New York City. The Kheel Building still stands there today (although now it’s apartments for rich people). My dream is to have an art fabric manufacturing company in a Kheel Building West. 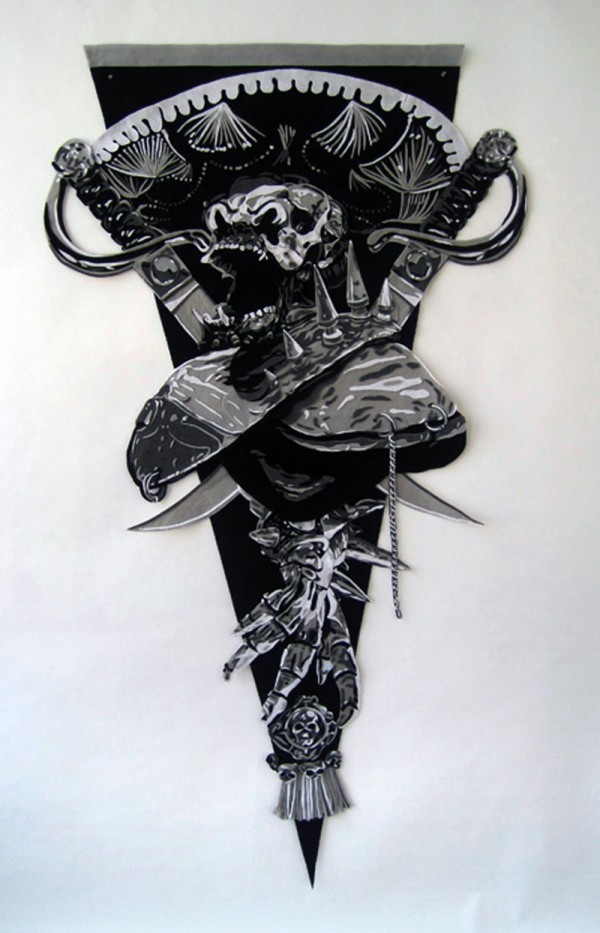 What are or were some of the strongest currents from your influences you had to absorb before you understood your own work? I think there is an current of revulsion and a current of attraction that constantly need to be balanced to make successful work. I think in some ways, well-crafted fabric work is automatically attractive to people, so the trick is to make something that also confuses or slightly repulses them as well. That’s where the poetry is, right?

Do formal concerns, such as perspective and art history, interest you? Yes, very much so. For the most part, I am more interested in artwork that takes some sort of skill to produce so I’m very interested in, and consider myself a part of, the Radical Craft movement that has emerged in the last few years.

What do your choice of images mean to you? For the series on sports cards, the images are very personal and connect to my childhood and my relationship with my brother. Growing up with a single mom a lot of these athletes were our father figures (even if off the field they weren’t the best guys in the world). It amazes me how these images of athletes connect people of different cultures and ages, even though they start in such a personal place for me. For the images of fish, it probably started from growing up in Florida and Massachusetts and spending a lot of time on docks. But then when I started making them so many more meanings associated with fish started to come up: fish as metaphors for success, religion, purpose, belief, time. It’s amazing how many different things fish can mean to people. 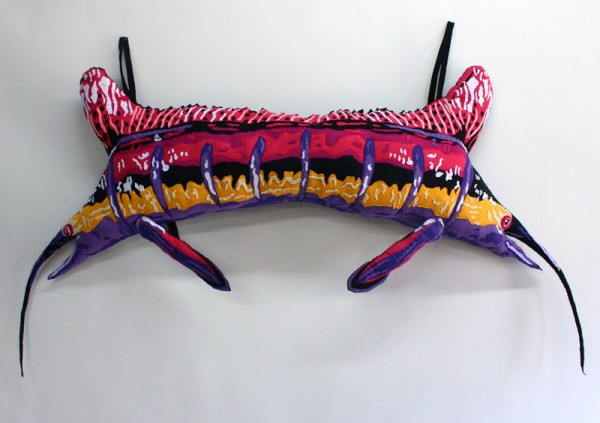 Do you look at your work with an eye toward it like what can and can’t be visually quoted? In other words what you will or won’t cut out? We have a saying in the studio – “Churn & Burn”. That is, anything you make should be able to be cut, screwed, gutted, changed, burned, combined, duplicated, whatever. I think I am always trying to make work that can be visually quoted in that I want to have the nerve to destroy something precious if it can make something better or more meaningful.

Do you have any secrets in your work you will tell us? Sometimes I have a secret sewing ninja from Monrovia that helps me sew. I could tell you her name but then I’d have to kill you.

How do you hope history treats your work? I hope history looks back on my work as an innovative take on a traditional medium. I think its an interesting time to be making this kind of work, it seems to me that people are really sick of stuff that is manufactured across the world that isn’t that well made and they are also sick of cutesy craft stuff that you see everywhere. I like to think I’m hijacking this medium to raise questions about craft and gender and once its all said and done my work will say a lot about being artistic guy in this day and age. 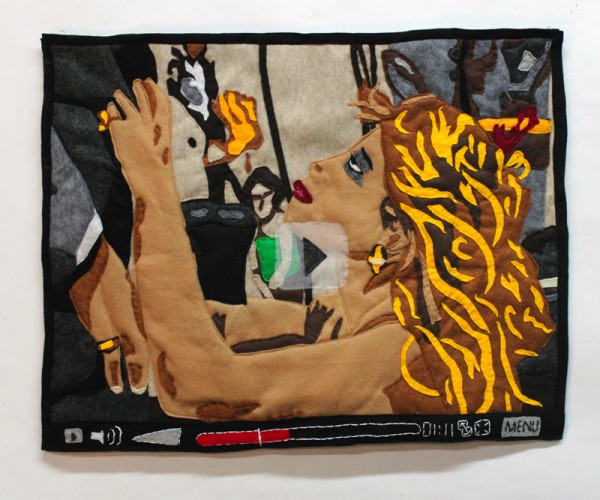