Besides making hats myself, I teach classes in millinery all over the upper midwest of the US. I am always amazed at what my students make. They take the same materials I use and the same blocks I use and they make things that I would never dream of. I love it. And I am always proud of them.

A few weeks ago I taught a class at the Textile Center in Minneapolis, MN. It’s a very highly esteemed organization and my students come to me with some pretty serious textile skills and usually with a very big stash box from which they pull the most amazing items.

I had some very ambitious students this time around– some returning with a very clear picture of what they wanted to do.

One of them wanted to make one of those giant floppy fedoras you see on the runway these days. To do this, I had to bring a brim block that we refer to as The Wheel of Cheese around Moe Sew Co HQ. Here’s a photo that gives you an idea of just how big this thing is. 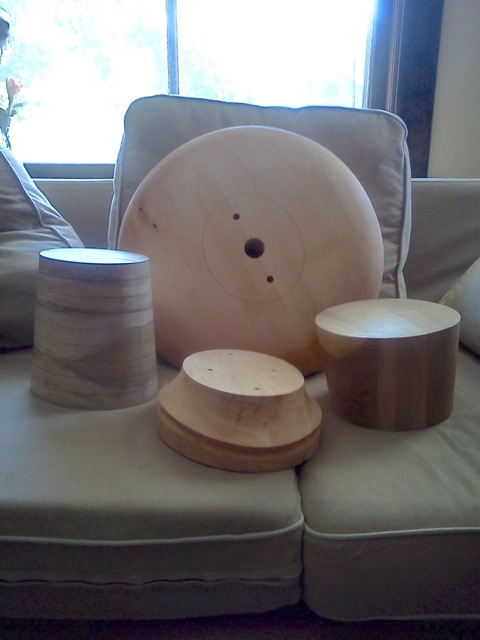 When I found this block in the catalog from Guy Morse-Brown it said something about how it was the brim “to end all brims.” I didn’t actually look at the dimensions. It was a bit of a surprise when it arrived. I don’t generally bring it with me to workshops, but she needed it and so it came.

Liz Heitzman took about an hour and at least three people to wrestle the brim to where it was supposed to go. Pretty impressive work. There was a lot of grunting. 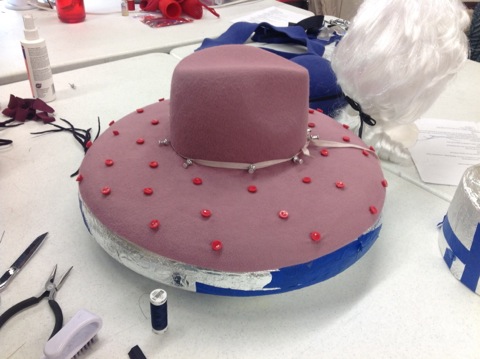 The little red pins are there to keep it flat on the block.

There was also an outbreak of freeform blocking– that’s where you shape the felt with your fingers into a shape that’s very different from the block underneath.

It all started here. Margot has been in every one of my classes at the Textile Center. I thought she was ready to take the plunge into freeform and I was right. 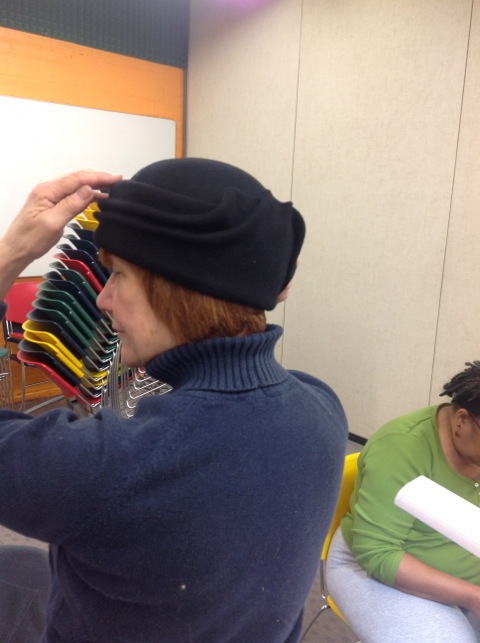 I just love the upward sweep in the back. The front is good too, but I love the back.

But then there was The British Empire.

When Stephanie Drinkard emailed me to ask if she could make a tricorn hat with a ten inch boat on top, I was nervous. I asked around and discovered that I didn’t need to worry about the tricorn. That’s easy. Stephanie also admitted to me that she had been a costumer for a major theater in the Twin Cities and now works as an electrician for the Guthrie Theater, the most highly regarded theater in the Twin Cities.

I warned here that there were going to be some structural demands that were going to require some serious problem-solving, but her resume gave me confidence that she could definitely handle it.

I didn’t ask her before class exactly why she wanted to make a tricorn hat with a ten-inch ship on top. In class she explained that she was going to dress as The British Empire for Halloween. That makes perfect sense to me! But I’ve got a husband who dressed as a breakfast table for 4th grade and a niece who’s dressing as The Letter H. 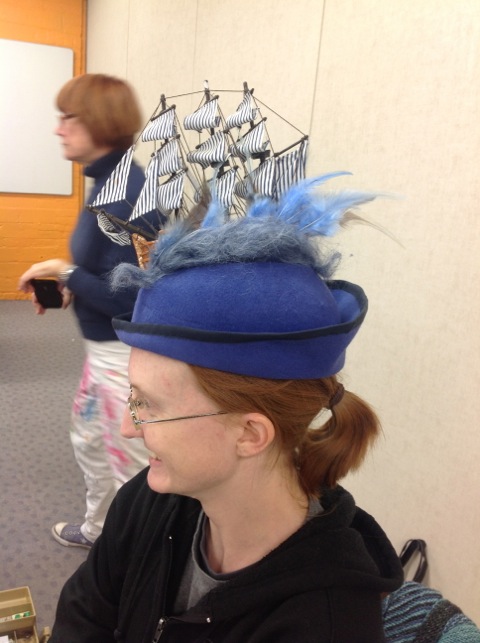 I knew right away that I had to feature this in my next Mr X post. After all, it’s kind of a British blog and it’s entirely ridiculous that someone from the middle of the US would dress as The British Empire for Halloween.

I had hoped that I could have gotten a photo of the entire costume. She told us that she had written “India” and “Ireland” on the soles of her boots. I want to see that.

Let us examine this hat, to note the details. The tricorn shape is not very pronounced. A choice she made to make sure that the ship was the focal point. The ship itself is ten inches tall. You can’t see it from this view, but there’s a tiny British flag flying just where it’s supposed to be.

Now check out the waves. She covered all of her stitches with them (BRILLIANT). There’s charcoal roving that she worked into a wave-like pattern with those very same invisible stitches. It looks like an angry sea. The blue spike splashes are made with dyed blue coq feathers. Perfect. Just exactly how they should look, made with lightweight materials. She needed to pay attention to that as the ship was a little on the heavy side.

The question most everyone should ask about something like this is, “How does she keep it on her head?” She’s going to be wearing a wig, so she has some hair thickness she can use. Fine hair is terrible to work with (trust me on this. it’s what I’ve got), so the very thick wig is easy. She put several tiny hair extension clips on the inside of the hat so she can “staple” it on to her head.

(I hope that I can update this post with pictures of the entire costume some time this week)!

Next month: I’ll take some of the mystery out of millinery and explain exactly how we do all of this and what the fancy terms mean.