Cate Hursthouse is a textile artist from Bedfordshire, England. She gave a talk at my local Embroiderer’s Guild branch earlier in the year, and I’m pleased to feature her. Here’s what Cate says about her work:

“Cloth is central to my artistic practice, both as a medium and as a site of investigation. Cloth is ubiquitous, physically and psychologically intimate.  Its inherent protective qualities and potential for self-expression are exploited on our bodies and in our homes, yet its physical two-sidedness and our linguistic naming of ‘right’ and ‘wrong’ side hint at a possible darker nature, reflecting its liminal artistic status.  Referencing the dual status of cloth as both revered and mundane object, and focusing in particular on its role in the home, I explore the idea that cloth may possess the potential to spill over into ‘something else’ something less comforting; a ‘might be’ shift of state realized through a poetic, inner reading of cloth. 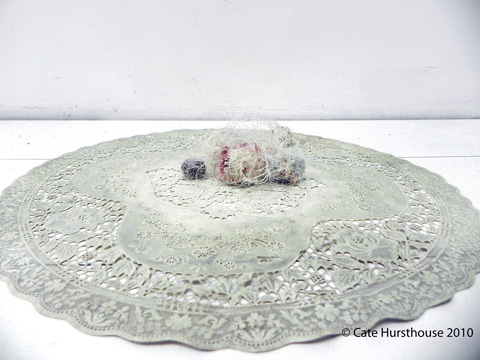 “Theoretical allusions to cloth as corporeal double, a potential purveyor of mystical powers and with the power to reveal repressed memories bestow on cloth tropes of the Freudian ‘Unheimlich’ or ‘Uncanny’ and I draw heavily on these allusions in my practice. The alternative translation of ‘Unheimlich’ as ‘Unhomely’ provides a direct linguistic connection to the domestic and is my preferred translation.  Inherent in the term ‘Unhomely’ are allusions to cloth’s non-precious status, associations with amateur craft, primitivism and the abject.  More than just haunted, the ‘Unhomely’ is an atmosphere that seemingly emanates from an object challenging the preconceived ideas of the domestic idyll.  Whilst commentators argue as to its exact character I view the ‘Unheimlich’ as a ‘disturbance’; in theoretical terms a psychological disturbance of the present by the past, yet also a description of the emotional response to this encounter. 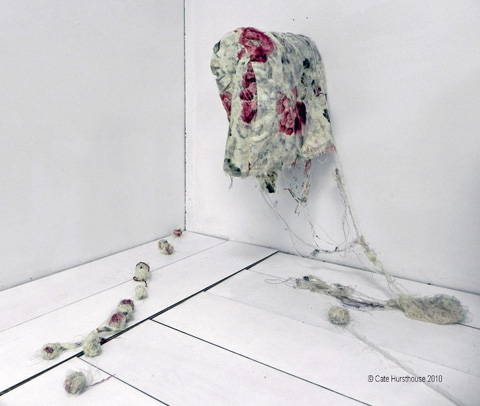 “My work uses mainly recycled domestic textiles and mundane domestic materials and processes.   The point at which cloth begins to break down, where its status and materiality is no longer secure is, for me, significant and worrying, the apparently now unrestrained threads, encroaching web-like to occupy space.  The worn cloth also demands questions about how this state has arisen, is the tear accidental or a result of force, is the worn hole a sign of emotional attachment or domestic hardship?

“Hand stitch, with its strong connotations of the domestic, is the mainstay of my practice.  Whether functional or decorative, it is an explicitly human disruption to the surface of cloth. Powerfully nostalgic hand stitch is also a potent ingredient in changing the status of cloth, transforming the ordinary into an heirloom. 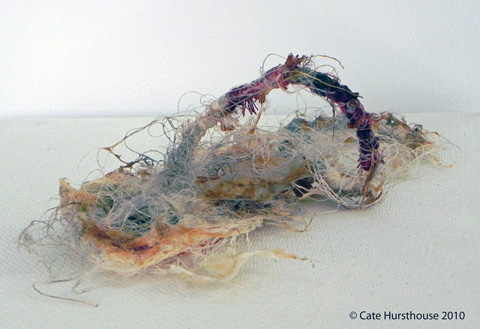 “Stitch has gained greater significance in more recent work as I begin to consider if there is a relationship between stitch and the ‘Unheimlich’, as the eruption of the thread from the wrong side of the cloth in the process of stitching may be considered to mimic the re-appearance of the forgotten in the ‘Unheimlich’.  This has lead to an abstracted form of stitch, which almost totally discards the cloth.  No longer possible to determine the right and wrong side of the cloth, stitch has become more than a mere decoration, occupying space in its own right.  The recording of this work in photography and book format returns the ‘Unhomely’ to its literary roots.”

Cate is in the final stages of her MA course and I’m fascinated by the approach she has taken to the subject. The clash between the beauty of the cloth and the mundance functionality of its intent is something we take for granted, and Cate amplifies this contrast by featuring materials that are near the end of their existence. The unravelling of the pieces echoes the organic decay in food and plant stuffs and forces you to reconsider your relationship with the materials. So often we find ourselves at the start of the creative process – Cate plays with the pieces at the end of their journey. 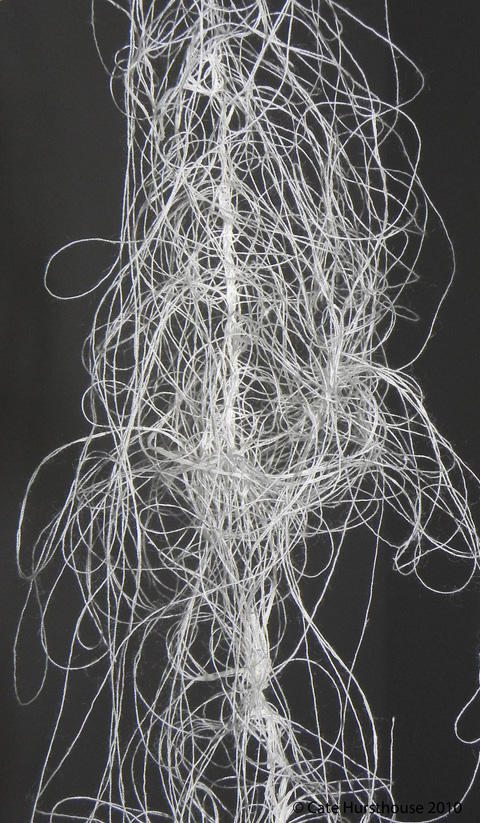 and if you’re in West Sussex from 7th to 15th December, you can see her work for real in an exhibition called Place: Sight and Sound.

, the inspirational stitched art blog from the legendary Jenny Hart.