Hi everybody! Welcome back! Last time we looked at Joseph Beuy’s fiber work, this week I thought we take a look at Claes Oldenburg. 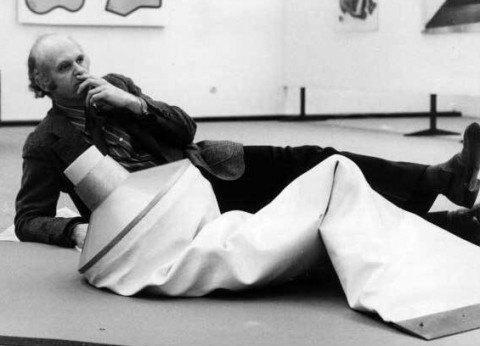 These days, when we hear the phrase “Soft Sculptures”, most of us tend to think of amigurumi, or felted critters, or plushies that have graced the pages of contemporary crafting magazines and websites. However, Claes Oldenburg practically invented them, or at the very least gained his early fame working in that medium. Since 1962, Oldenburg has created large soft sculptures of common objects using materials ranging from canvas to naugahyde. He often revisits the same object over and over, rendering it in different materials or presenting it in different states, sometimes deflated, sometimes suspended, sometimes solid. He says his soft sculptures are “…not as indifferent to the body as non-objective art, yet they are not as fleshy as figurative art.” He goes on to say that his forms “…are constantly engaged in promiscuous intercourse and may turn up as almost anything.” A great example of this statement is his piece Soft Light Switches (1964). 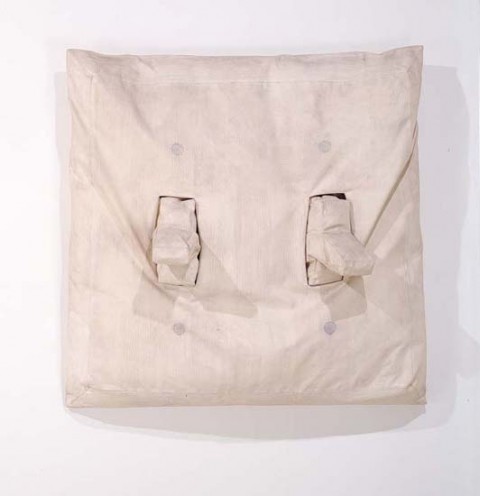 I’m not the first person that’s noticed the obvious erotism in these pieces. It’s also difficult for me to view the following pieces without anthropomorphizing them. 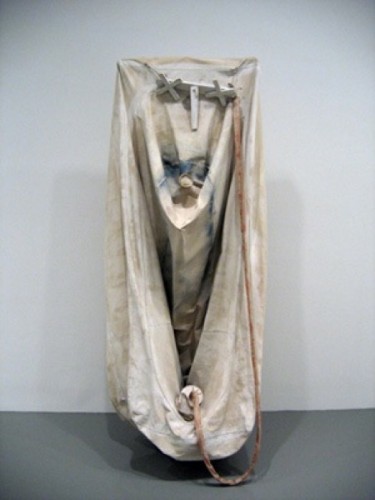 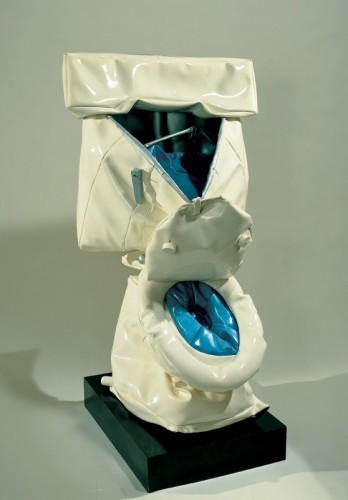 On his manipulation of scale, Oldenburg said, “One day I combined landscapes and objects, only I didn’t change the scale. I had a drawing of a vacuum cleaner and another of Manhattan- and I just superimposed them. The result was automatically a ‘giant vacuum cleaner’ because the city held its scale- it didn’t become a miniature city. Somehow it just worked and I said to myself, ‘Well, look what I’ve got here!’ Then I tried another one. It was a way to get into landscape drawing which is one of my favorite vices.“ 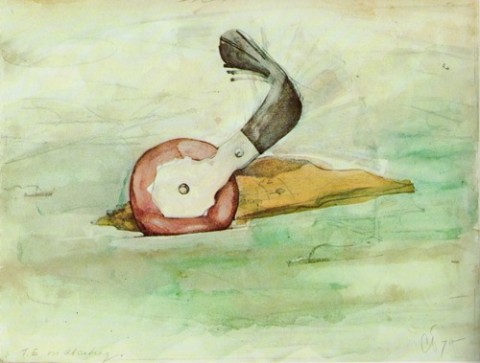 Proposal for a Colossal Monument in the Form of a Typewriter Eraser of Alcatraz, 1972.

The Typewriter Eraser is another piece that despite the “ordinariness” of the subject, shifts and takes on different characteristics. It goes from being dynamic to almost melancholy depending on the material and the presentation. On one of the sketches for the piece, Oldenburg wrote, “This form of typewriter eraser- now becoming antique- suggest other parts of the body as well- for example, the belly, with it’s ‘button’ and the brush of pubic hair below.” 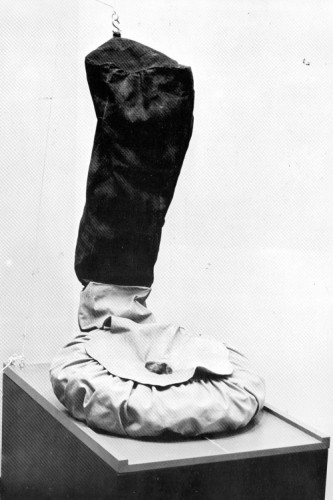 Proposal for a Giant Ballon in the Form of a Typewriter Eraser- Model 1970. Painted canvas filled with foam rubber.

From and interview with Martin Friedman (1975)-

MF: How did the Eraser become a tornado?

CO: An early tornado sketch in 1970 resulted from my having the subject strongly on my mind while hearing the story of a tornado cut a swath through Lubbock, Texas.

MF: Are there any other associations between the tornado and the eraser?

CO: Well, of course the tornado erases… In Lubbock it drew a clear path across the city.

MF: Obviously the Eraser has many roles- both lyrical and menacing

CO: Yes, the falling eraser is a victim role, perhaps with the plight of secretaries. The eraser as Medusa or octopus is more threatening. As a sphinx it’s mysterious and in it’s reclining position it’s voluptuous. I think the typewriter eraser is female. I see that in thinking about the eraser I have brought out stereotypes of “the woman”. 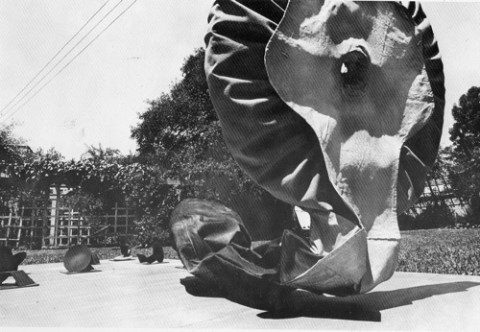 He says his monuments are, “…not about Gods and heroes, I’d like to replace all those statues of Horace Greenley and Garibaldi with objects. What does Horace Greenley mean to the average city dweller? What does Greenley mean to me? Monuments are idealized images without true emotions.” He goes on to say he’d like “…to get away from public monuments, which are false, and into lyrical monuments, which are true because they’re personal.“ 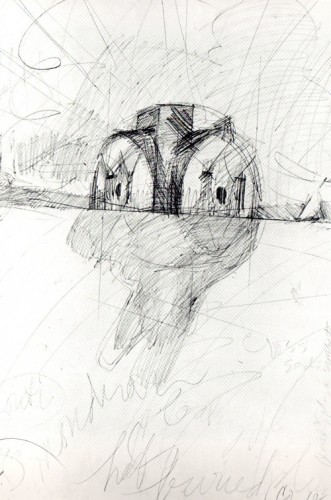 “I believe that the first drawing was in 1965- the plug floating in water. You could see part of the plug above and part below the water. It looked like a buoy or a tank floating in the water. In my fantasy it became a cathedral, a floating cathedral.” Claes Oldenburg, 1975 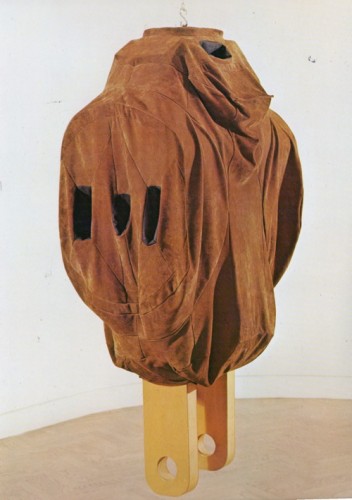 “As it gets bigger, it becomes an architectural form. It looks like the Hagia Sophia in Istanbul… The English Plug is a different form. It doesn’t have this pattern of crossed vaulting. It relates some sort of structure, but not a church. I found it adaptable to a crematorium.” Claes Oldenburg, 1975. 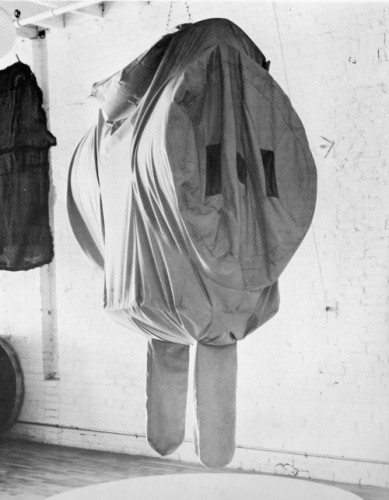 “I am trying to create a combination of art and reality. On the one hand, the hard Three-Way Plug is really about an anti-aesthetic formulation of a sculpture because it’s almost a slavish recreation of an object. It’s like saying this is as good as a sculpture because I claim it to be. On the other hand, it’s qualified by an aesthetic intention that I also have. But, in my work, art is limited by the boundaries of appearances, and if I make this Three-Way Plug, I don’t put it on something or against something. It’s contained in itself. I’m formulating a concept in which sculpture and object are one thing- together- and I think that’s a radical notion of art.” -Claes Oldenburg, 1975. 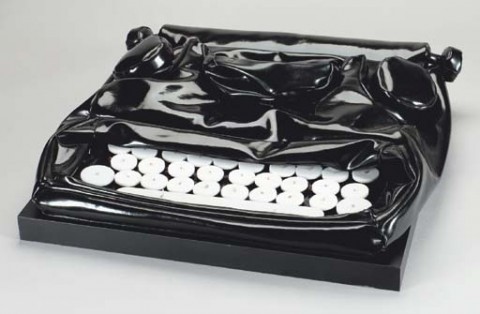 Finally, I’d like to close with this bit of an interview with artist Faith Ringgold from 1990 and her thoughts on Oldenburg’s work.

Eleanor Flomenhaft: How do you define your art?

EF: Do you determine whether the other quilts are craft or art before you agree to enter a quilt exhibit?

FR: I’m not that uptight about that. I realize that people want to make that distinction, and I feel that maybe by the year 2000 people will be asking what all that was about. At one time I thought that what we meant by craft was the use of certain kinds of materials. But that’s not it either because Claes Oldenburg’s soft typewriters are sewn pieces, and I never heard anyone call them craft. It’s who’s doing it that makes it craft; but I can’t afford to conduct my business by what other people are thinking although I know it affects me…

On that note, next time we’ll take a look at some of the ladies of fiber art.

Penny Nickels is a printmaker that started playing with needles with tremendous effect. She and her husband, Johnny Murder, have been described as the “Bonnie and Clyde of Contemporary Embroidery“ and you can discover the power of her creativity at her blog