The fiber arts have long been implemented in exploring the sociopolitical arena. In recent years, Craftivism has been used to call attention to everything from AIDS to economic issues. When I started thinking about this article, I was hard pressed to come up with many historical examples. Most of us are quick to remember Madam Defarge from a Tale of Two Cities, or accounts of quilt codes being used to guide slaves to the underground railroad. But Madam Defarge is a character, and the use underground railroad quilts has proven difficult to substantiate beyond legend. So I cracked open my books and I found some wonderful examples. I’ve broken them down into two groups.

Works that call attention to a specific issue- 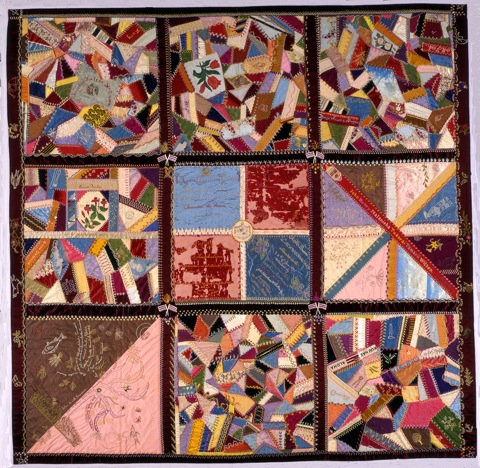 Queen Lili’uokalani was the last Monarch of Hawaii. Although she fought to prevent Hawaii’s annexation by the United Stated, she was ultimately unsuccessful. In 1895, after a failed rebellion and the discovery of firearms in her royal garden, she was sentenced to five years hard labor which was then commuted to imprisonment in her bedroom in Iolani Palace. It was here that she started The Queens Quilt. It measures 97”x95” and contains nine blocks that document her 10 month imprisonment. The center block is embroidered with the words, “Imprisoned at Iolani Palace… We began the quilt here.” Read more about the quilt HERE. 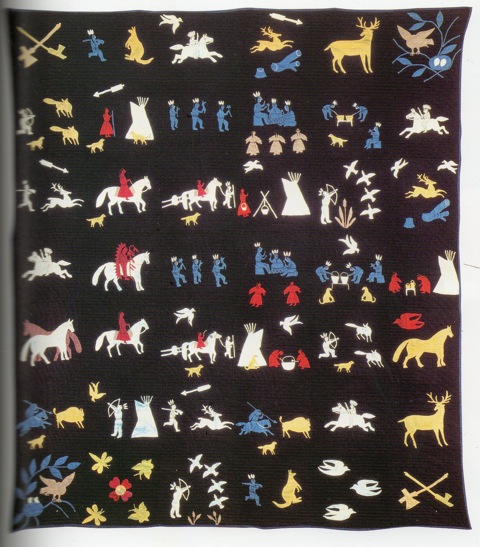 Made by Rebecca Blackwater, a Sioux woman who worked for Ella Burton, the wife of the superintendent of her reservation. Filled with depictions of reservation life, it also tells of conflicts between Natives and white settlers. Apparently when Rebecca was asked why she had reversed the traditional practice of the women walking while the men rode horses, she replied that it was one of the few customs among whites that she approved of, so she included that image. 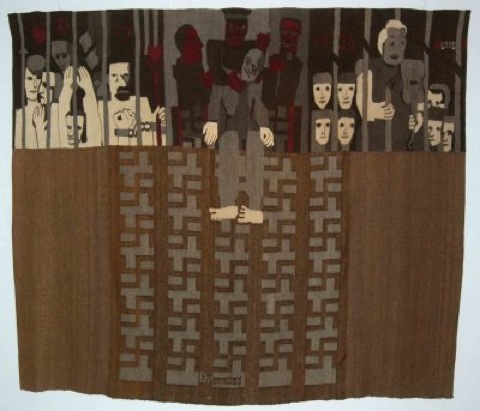 Hannah Ryggen was a Swedish born fiber artist, although she lived most of her life in Norway. Many of the themes she explored with her work were highly political, focusing on fascism, feminism, human rights, and political decline in the 1930’s. Her piece above depicts the horrors of the Nazi regime.

These pieces feel very introspective to me, as if while they were being created, the maker was exploring their own relation to the events depicted. It’s very a very different feeling compared to the next group, works that support a cause. 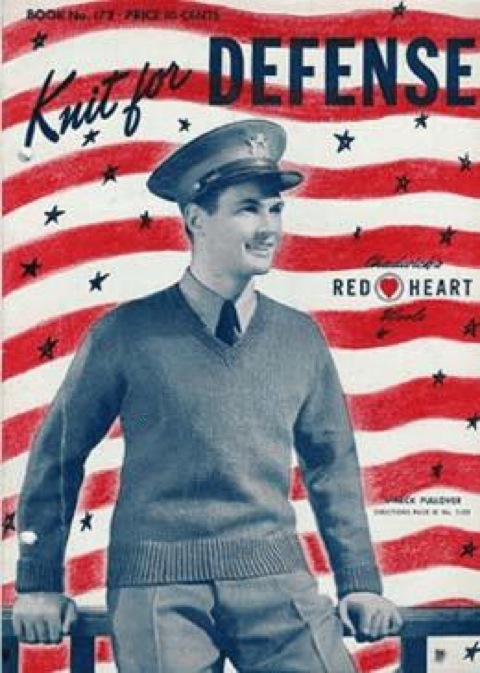 I’m going to assume that many of us are familiar with the tradition of knitting to support troops, so I’m not going to speak about it here, but I do want to take a look at examples of propaganda in textiles. 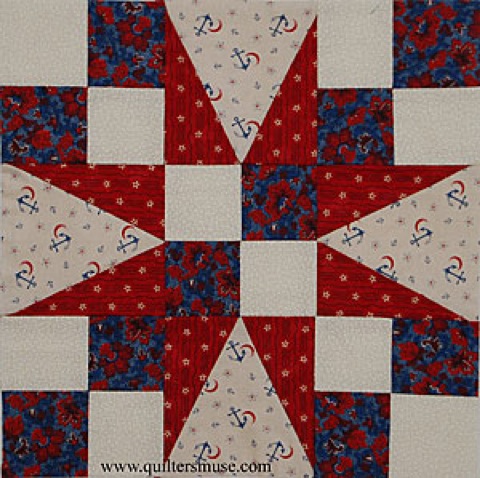 The quilt block above was made by Patricia Cummings. It depicts a pattern called “54-40 or Fight”. The title refers to a popular slogan of the same name used by Americans who wanted the boundary between Canada and the Northwest Territory to be set at 54 degrees 40 degrees North. The dispute was finally resolved in 1846. (See a great website on political quilting blocks HERE) 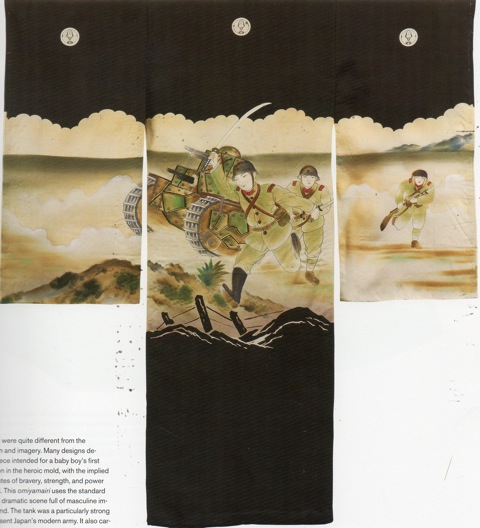 This item was intended to be worn by a baby boy on his first shrine visit. It depicts heroic military action, which is a common motif in Japanese war themed clothing of this era. 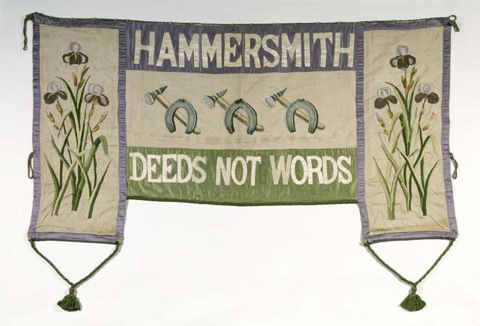 This banner is from the Hammersmith Women’s Social and Political Union, early 1900. The WSPU was the leading organization campaigning for women’s suffrage in the U.K. Their members were the first to be called “Suffragettes”.

So meet me back here on April 14th to see contemporary examples, and as always, I welcome any suggestions for future articles! Contact me at [email protected] and let me know what you’re interested in!

* Books referenced in this article- The Quilter’s Resource Book by Maggi McCormick Gordon, Wearing Propaganda: Textiles on the Home Front in Japan, Britain, and the United States edited by Jacqueline M. Atkins and The Illustrated History of Textiles by Madeline Ginsburg.