Welcome to the Cutting (& Stitching) Edge where we showcase artists whose work will challenge your preconceptions about embroidery and needlework. This month, it’s Heather Rios, a mixed media artist from West Virginia whose cross stitched portraits defy familiarity.

“Almost all my work is based on selfies of self-identifying women. I use their photographs (with permission) and edit them as little as possible before rendering them in cross stitch embroidery.

“I was a painter for over twenty years before I began to work almost exclusively in the medium of textiles. Textiles, and especially embroidery, share a similar plasticity to paint, and embroidery flosses can be considered a “dry” form of paint since they are a vessel that can contain color pigments and can be manipulated and worked similarly to paint. Their histories are very different, however, and embroidery has a very different relationship to art history than paint. Though men have been very involved in making tapestries and textiles all throughout history, the evolution of textiles, especially in the last few centuries had become almost exclusively a woman’s craft. “Craft” because it had been separated from fine art and not given any respect or consideration as a legitimate medium for artists.

“For hundreds of years, needlework, embroidery, cross stitch, and quilting were all considered women’s work, while women were simultaneously being excluded from art schools, salons, and academies.  But women’s bodies appeared in a large majority of artworks created during this time. Women were the subject/object in art, but rarely the creator/author of art. Long before photography, paintings served as the only form of portraiture and were the only means of creating an image of a person. The images people viewed of women were almost exclusively made by men. This means men controlled the visual tropes and conventions of the imagery of women. Women were only passive subjects. Black women and other women of color were objectified and demeaned much much more and their appearance in artworks usually reflected their treatment by white men and white people at the time they were created. This continued on into the invention of photography and cinema, the visual languages and idealization/objectification of women’s bodies continued on in mass media and advertising.

“One of the first known female nude self-portraits was made by Paula Modersohn-Becker in 1906. It was still a rare occurrence for women to create nude images of themselves, even though the nude female remained one of the most popular subjects in art. The “feminist movement” during the mid-twentieth century saw a huge turning point in this regard. Many women began creating art based on their own bodies. Everything from performance art to photography and painting. Artists like Ana Mendieta, Tracy Emin, and Cindy Sherman have been shaping the way women participate in the art world and are active creators instead of passive subjects. However, the more important shift in image making that affects many more woman and society as a whole, has been the advent of the “selfie”.

Though often thought of as a vain pastime of teenagers, the technological changes of the past twenty years are creating what I believe is one of the most significant changes in visual culture for women in hundreds of years or more. Through the use of smartphones and social media, women can create their own meaning, author their own images of themselves and portray themselves however they want. Images of women, by women, are now far more prevalent than images created by advertisers, television, or painters. The idealized, Eurocentric and fat-phobic images of the past are slowly being replaced by much more diverse imagery and selfies have contributed significantly to this. Though they are still not accessible to everyone (people without access to the technology or people unable to use it) selfies still have so much potential for shaping visual culture. This is why I have been focused on selfies as my subject matter for my embroidery work.

“Selfies are also so ubiquitous that they are overlooked and not appreciated for their artistry. This is why I love the shift that occurs simply by changing the medium (in my case, from digital photographs to cross stitch or paint). When a simple bathroom selfie is intentionally made into a work of art, comparisons can be made. “Art” has always had connotations that create awe and respect in most people. A painting in a museum is a thing to be revered and appreciated. Many of the women I create portraits of are amazed and so thankful for what I’ve done. Seeing their selfie (that they had no idea would ever be made into artwork because I only chose photographs that had already existed) they see them in a frame, they see themselves as art. Art that they themselves had a hand in creating. It’s also important to me that they created the original image completely on their own. I didn’t ask them to create it beforehand. I didn’t ask them how to pose or what to wear. It was all their choice.

“It’s such a radical shift from what we’ve been used to our entire lives. We can make and create images of ourselves now. It’s much more important than people realize and I’m very excited and proud to celebrate it. Images of women, made by women, rendered in a medium that is traditionally considered a lowly women’s craft. That is a crude summary of what my current work is about, and why I’m so passionate about it.”

This is normally the point where I would add my thoughts into the mix, talking about the slow creation process of stitching being a contrast with the immediacy of the selfie, or the conflict between the familiarity of cross stitch and the voyeuristic nature of the images, but Heather Rios has done such a fantastic job of explaining her art that there’s little else to say.

It’s great to see artists from other genres bringing their creative viewpoint to the world of embroidery, even more so with cross stitch, so I am excited to see how Heather’s work evolves and what she will produce next. Keep track of her on Instagram and you can enjoy the journey as well.

Are you an emerging embroidery artist? Want to be featured on this column? Get in touch! 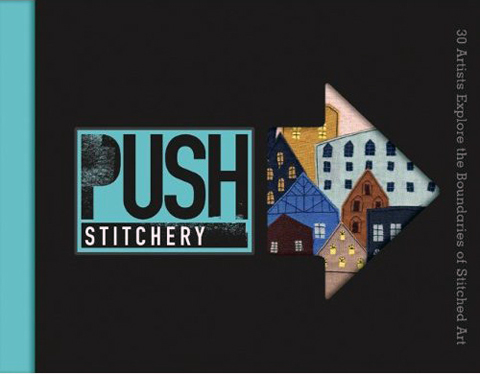