Hello all-another installment of Future Heirlooms with the very talented, and very kind and wise artist Jane Waggoner Deschner I met Jane in NY through a friend of mine and am so glad I did. She is a truly wonderful and giving soul that I am lucky to know and her work rocks too. Check it out!

Where do you live? Does this affect your work?

I’ve lived in Billings, Montana, since 1977. I don’t make “Montana” art, or even art one would think of as representing the West. But, the isolation of living out here in these vast spaces, within the pervasive cult of rugged individuality, does have an effect on me. Surrounded by “Big Sky” makes me feel open and less inhibited/influenced than if I were making art in NYC. Urban is an entirely different kind of stimulation, one that I seek on an annual basis (or more often, if I’m lucky!). To connect with the larger art world, I travel, do residencies, cultivate and maintain relationships via the internet. 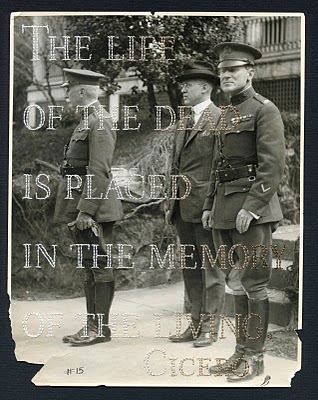 How did you begin to embroider?

From junior high on, I’ve always made things–functional sewing and knitting mostly. When my children were small, I did some embroidery, but none since the 1970s (and never as art) until several years ago. I went back to grad school in 2000. The result of all the transitions, complications, manipulations, consternations and exasperations that buffeted me during my time in the MFA program was that vernacular photographs became my medium; and the Mac, scanner, Photoshop and Epson printer, my tools. I began accumulating photos, buying on eBay. I looked for large lots from mid-20th century. Sometimes studio portraits were included. Studio portraits inherently are not very interesting–someone dressed up to look his/her best, hired a local photographer, then picked the most flattering shot. How could I use these photos, give them some character? I got to wondering what these people might say. Or, better yet, who they might quote if they were to express themselves. My other work with photos at that time was done on the computer; and the finished artwork never included the original artifact. Embroidering quotes into the old photos let them speak, or, better yet, allowed me to speak (I give meaning to those uninteresting studio shots). The photos were authentic and had once belonged to real people. And, I was able to work directly with my hands again. I could have painted or drawn on them, but embroidery seemed respectful, more intimate and also better fit my tight way of working. 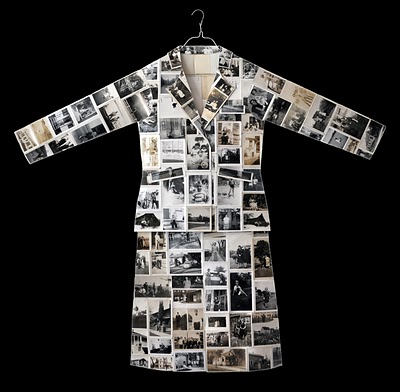 How has your work evolved since you first began working with embroidery? 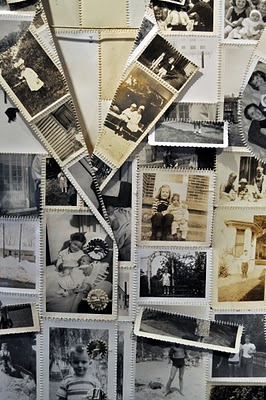 Some inspiration and influences?

Two books I learned about in grad school have been hugely influential. The first, Roland Barthes’ “Camera Lucida,” I reread every year or two. From Susan Sontag’s “On Photography,” I get a quote that is the basis for my work with found photos: “The ultimate wisdom of the photographic image is to say: ‘There is the surface. Now–think–or rather feel intuit–what is beyond it, what the reality must be like if it looks this way.’ Photographs, which cannot themselves explain anything, are inexhaustible invitations to deduction, speculation, and fantasy.” ~Susan Sontag, “On Photography,” 1977 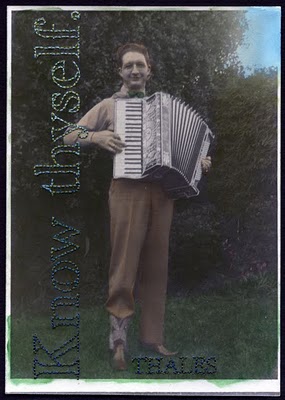 Does the practice of embroidery affect the conceptual aspect of your work?

There are three elements in this work: embroidery, vernacular/amateur photography and quotations from famous people. All are significant and I rely on the interplay among them to provoke an ironic sensibility. Both embroidery and vernacular photography are marginalized mediums, employed by everyday people. Being a purely interpretive medium, embroidery was historically a means of poetic and philosophical release for numbers of women who had no other outlets for their idealistic feelings. Embroidery’s only utilitarian aspect was/is psychological. Snapshooting became widespread the late 1800s when people were finally able to take their own photographs, to capture likenesses of themselves and others without relying on a professional. It was and remains a very widespread, hands-on means of creative expression. The hundreds of billions of these photographs attest to an amazing fabric of lives lived and hoped for. I give a photograph–taken by someone out of love to remember a special person, time or place, then lost or thrown away–new life and meaning. I like the idea of resurrection/remembrance, the past brought into the present.  The quotes and symbols I embroider allow me to express, in sampler-esque form, ideas my aging maternal self wants to share. There’s a hugely obvious parallel between “found” words and found photographs. 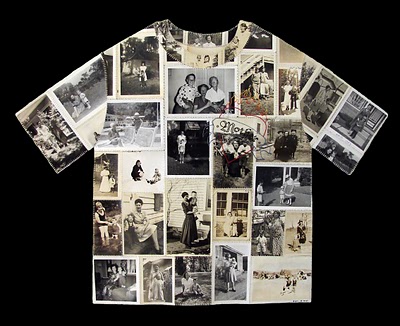 What is the role of appropriation in your work to your concept?

I appropriate everything–photographs other people have taken; words other people have spoken; fonts other people have created. My contribution is to discover then recontextualize the disparate elements into a new work. I appreciate the absurdist quality of mixing the two opposing mediums of embroidery and photography. I hope that the viewer’s familiarity with my source materials facilitates an interest in and/or understanding of the finished artwork. 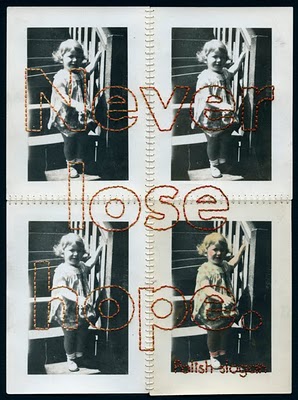 How do you select the photographs that you use? Where are they found?

I’ve gotten almost all my photos on eBay. I look for large lots: snapshots from estates, movie publicity stills, news images and studio portraits. I also know a dealer in Portland who will sell me 1,000 snaps for $100. Right now I probably have 12,000—15,000 photos. Occasionally I buy one or two images if it’s something special that I know I can use. I’m bidding now on several 8 x 10s from the original Star Trek. I wanted some photos of Eisenhower for a series and found some good ones on eBay, both snaps and news photos. Occasionally people give me family photos that would have discarded after they’d sifted out the ones with personal meaning. I select the photos I use in the same way I select the quote. It’s a matter of finding that special “hit” between image and words. It’s so great when it clicks! How is it to puncture and physically change such precious objects as family photos? I also remember that these pieces of paper have been discarded for some reason, no longer wanted by the people to whom they were important. I’m giving them a second life, recontextualizing them as “art.” The original creators are my collaborators. I also see these photos, especially the snapshots and studio portraits, as representations of our collective experiences. We all snapped birthday parties, first steps, big fish and had a professional record how we looked in preparing for marriage or graduation. I believe we can learn from one another, by being reminded of our similarities, the interwoven fabric of our lives. Embroidery is a meditative practice. It allows me to “connect” with generations of women before me. These photos have been handled by many; I’m adding my handwork and fingerprints. As artist/embroiderer David Willburn pointed out to me: I am puncturing, but I am also suturing. Destroying, but also mending. 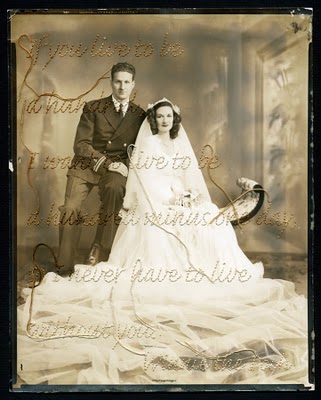 What is the next direction or step for your work?

I have a 4-week residency  this month and a 6-week one in September. Since the last residency, I’ve bought several large lots of photos, each from a different estate. That means that I have images of a single group of people over an extended period of time and in many different circumstances. One idea I’ve had is to make a snapshot crazy quilt with each block being a particular segment of or time in a person’s life. That would give me the chance to explore developing more intricate embroidery stitches. I want to expand the garment series; more t-shirts and perhaps some other items of clothing. A snapshot collector friend wants me to make him a tie. I’d like to do more commissions. I’m also pursuing getting my work “out there.” 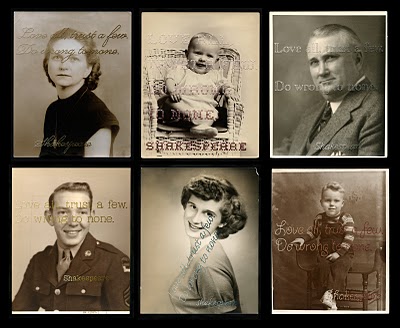 What else do you spend your time doing? hobbies? family? jobs? activities?

I just quit my adjunct teaching/gallery directorship. I have two wonderful kids with great spouses, three adorable, smart grandkids and one on-the-way. I just made seven Jedi cloaks for Jack’s 5th birthday party in February. I’ll make the new baby a pink, patchwork flannel blanket, and I’m signed-up to make 2-year-old Ruby some Cabbage Patch doll clothes. I didn’t sew for years, but having grandkids caused me to oil up the old Bernina. I also knit the same size 2 toddler sweater over and over in different colors. I probably have 5-6 dozen in a cupboard upstairs. I’m not comfortable with idle hands (I’m digitally compulsive). I’d guess all the family stuff and women’s work continues to inform my art. Most of the volunteering I do is art related. “They” told me in grad school that part of my practice was work I do in the community. I’m slowly learning that I need to keep time for my personal practice, too. I’m on the National Advisory Committee for the Montana State University Art Department and I’m in my second year on the Montana Arts Council.  I’m usually stirring up something artwise, advocating for and educating about art and artists. I travel as much as I can to big cities (especially NYC) and residencies. 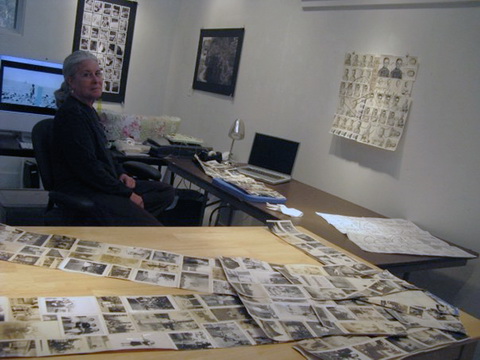 Where can we see your work?

Until next time Keep stitching!!! 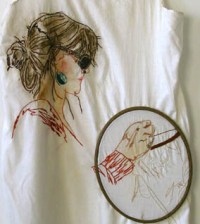 Joetta Maue is a full time artist primarily using photography and fibers. Her most recent work is a series of embroideries and images exploring intimacy. Joetta exhibits her work throughout the United States and internationally, and authors the art and craft blog Little Yellowbird as well as regularly contributing to the online journal Hello Craft. Joetta lives in Brooklyn, NY, with her husband, baby son, two cats, a goldfish.

Joetta Maue is a full-time artist, writer, and curator with a focus on the art of the needle. Her most recent body of work is a series of embroideries and images exploring intimacy and the domestic space. Joetta exhibits her work throughout the United States and internationally, and authors the critical blog Little Yellowbird as well as regularly contributes to Mr. X Stitch and the SDA Journal.