Welcome to eMbroidery, a series of interviews with male embroiderers. This month, Jerome Speekman. 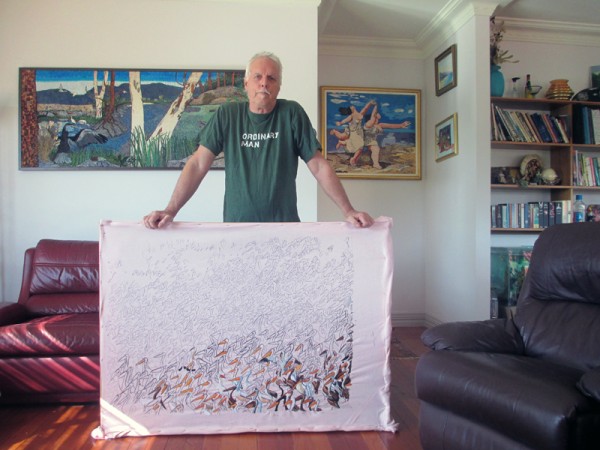 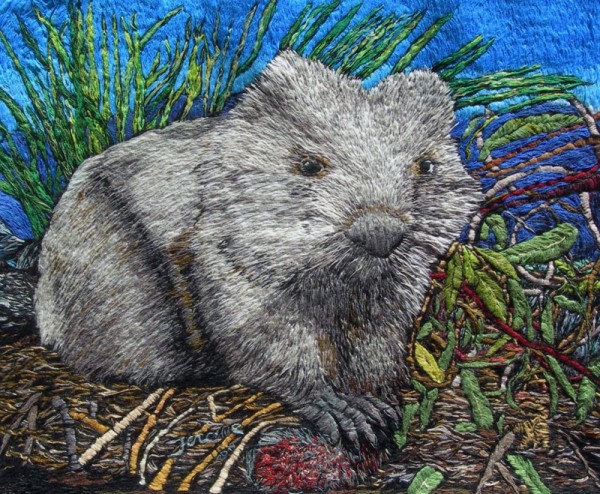 Noteworthy projects or pieces: It s hard to say myself which is the more noteworthy of my projects as each one I make a challenge to myself to see if I can do it and different people like different works of mine but, after 30 years of doing “pretty stuff” (native flora and fauna) and still not creating a (small) flurry in the art world, I decided to do something ugly to see if I could stir things up a bit. Watching the Russian news, I saw that 2 woman in Russia had blown themselves up, a policeman was holding their heads by their hair.I thought now that is ugly so I did 2 embroideries on that subject one looking from above which looks a little like a mandala and many people that saw it, thought it was something like that and speculated all sorts of theories on what it was. This was not the idea nor my intention I wanted to do something ugly something that would shock and made people realise that this was not done by grandma, so I photographed my work and used it in a 3D program to model all the figures in the same poses as my original work which I called self explosion . Having it in a 3D program enabled me to look at from a different angle more dynamic and self explanatory so I printed that angle out and used that scene as the next one in the series and called it Suicide Bomber which is far more dynamic and self explanatory. 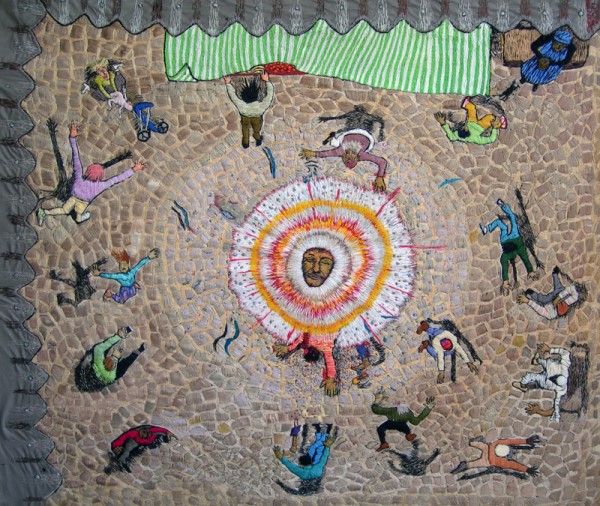 How did you come to be an embroiderer? My ex did some embroidery and I always loved the multitude of colours spilling out of her basket especially the blues that were made out of crushed lapis lazuli ,one day when I was not well I asked her to show me how to do a chain stitch. At the time I was reading a book on a comet that had passed the earth and I could just imagine the tail of this comet, so I did a work representing that tail on a jacket I had and when ever I wore this jacket so many women would ask me who had made it and how amazing it was that I thought I could do better so I started to more elaborate works. From clothes I progressed to wall hangings as clothes wore out and I would loose my embroideries as oil rags.

What does it mean to you? To me embroidery means contemporary art that I can do (when the works aren t too large) I can do anywhere at pick-nicks boring parties or the beach all I need is a few cottons and a needle that I can throw in a bag not leaving a mess (like oil painting) bar perhaps a few loose threads.

Where do you like to work? Mainly at home in front of the TV. 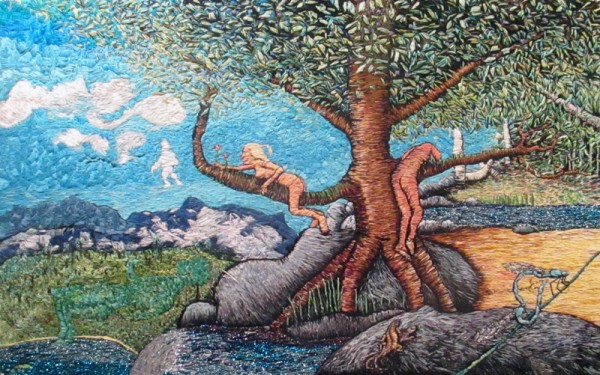 How do people respond to you as a male embroiderer? The response is usually the same, “how unusual for a man to do embroidery where did you learn that etc.How did you get started and wow your work is so amazing.

Who inspires you? I am self taught so I am mainly inspired by photographs I see on the net and I think that looks cool I wonder if I can do that as an embroidery.

How or where did you learn you learn how to stitch or sew? As I said I started by doing an open chain stitch that i made smaller and then bigger filling in the gaps. I lived in a forest for 7 years (learning about healthy living from a naturopath) in North Queensland swimming daily in a beautiful creek, the birdlife, especially kingfishers, were easily represented by stitches long and short the azure blue got me really excited to try and represent in an embroidery. 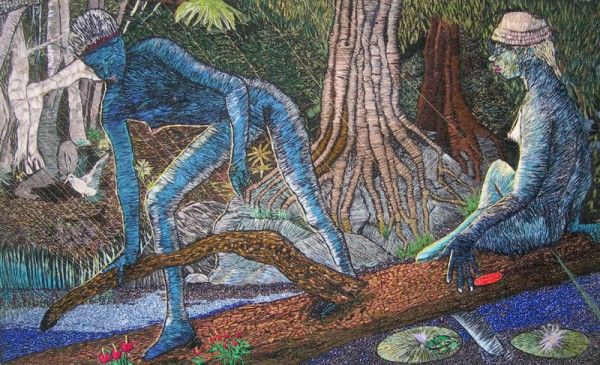 Are your current images new ones or have you used them before? I usually don t do the same work again except if some one wants me to do a commission sometimes I have done possums numerous times (up to 7 times) but I usually change the backgrounds plants and trees to keep it interesting for myself.

How has your life shaped or influenced your work? I am lucky enough to have a partner that supports me (as I have retired from the computer industry) so I work usually everyday on an embroidery and see it as a job and start work in the mornings and don t stop until it is time to cook dinner.

What are or were some of the strongest currents from your influences you had to absorb before you understood your own work? As most of my work is representative of nature and is rather photographic in the end result it looks just pretty but looking back I can see some influences of things that were happening in my life at the time for instance there is a work I did called weed rush which are 2 Crebes ( a type of bird in a mating ritual) I just like the picture and it looks innocent enough but I used to like weed and mating so it may not be as innocent picture as it appears. 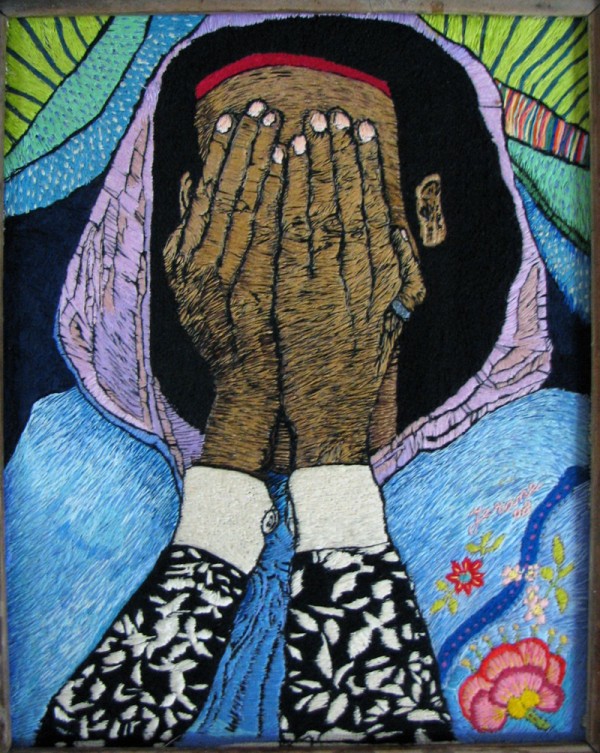 Do formal concerns, such as perspective and art history, interest you? I have been to many art galleries in the beginning of my career the curators (mainly ladies) are always impressed with my work and the size of them,however they don t know if it falls under fine art or craft which left them with the dilemma on where I would fit in with their gallery space. So more often then not it would be the end of their interest and I would feel left desponded that I would not be exposed to the public on a bigger scale. 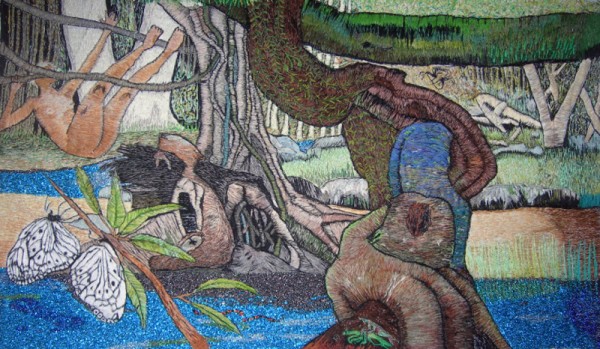 Do you look at your work with an eye toward it like what can and can’t be visually quoted? In other words what you will or won’t cut out? I always try and make my work a challenge to what can be done with my style of embroidery (short and long stitches)I would like to do bigger works but my framer tells me it is getting to hard for her to do really big ones and there is not much room for them on my walls in our house. At the moment I am doing a flock of pelicans from a photo I saw on the net on it are at least a thousand of those birds it looked hard to do so I started it it is probably one of the hardest embroideries I had to do as in the beginning looking at a small picture of the birds I can t find the same bird on my canvas how ever I soon gave up and doing it add lib. I can t recall ( I have doing embroidery for 34 years now) ever having given up on an embroidery but I sometimes do a sampler of a work so see how effective it is going to look These samplers I give away as presents on birthdays and the like. If I am not happy with a work I give them away to friends who love them and see nothing wrong with it but I am more critical.

Do you have any secrets in your work you will tell us? I do have quite a few tricks I use in my work but maybe that could be talked about later… 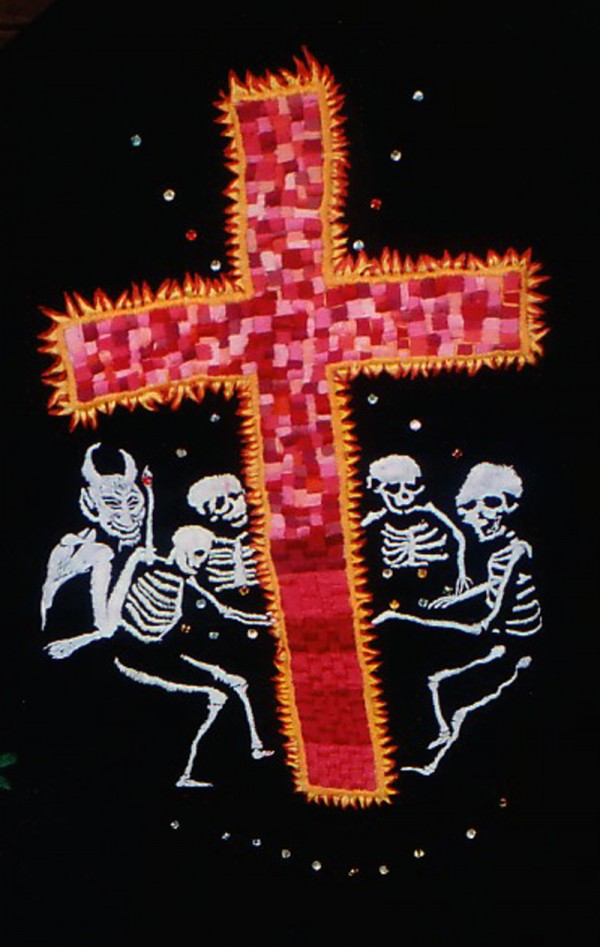 How do you hope history treats your work? I know for sure that they will say how did he get the time and the patience for it. This is often mentioned by people seeing my work, first of all it has nothing to do with patience as I can t wait to see what it looks like myself as each work to me as like and adventure I never know what it is going to look like in the end.

Where can we find you and your work? I reside in Bellingen New South wales Australia if any one wants to come and see my works they are welcome to come and visit most my works are for sale but I don t let them go cheaply. I understand that I will never will get the money go for 6 months of work how ever seeing how much some people get for their paintings I want my fair pay to. In my eyes my work is fine art not a craft all though I am happy to call it that to. I see my work as contemporary culture I use cotton like paint hence the phrase needlepainter which was coined by ladies in the know they also called it creative embroidery or needle painting. 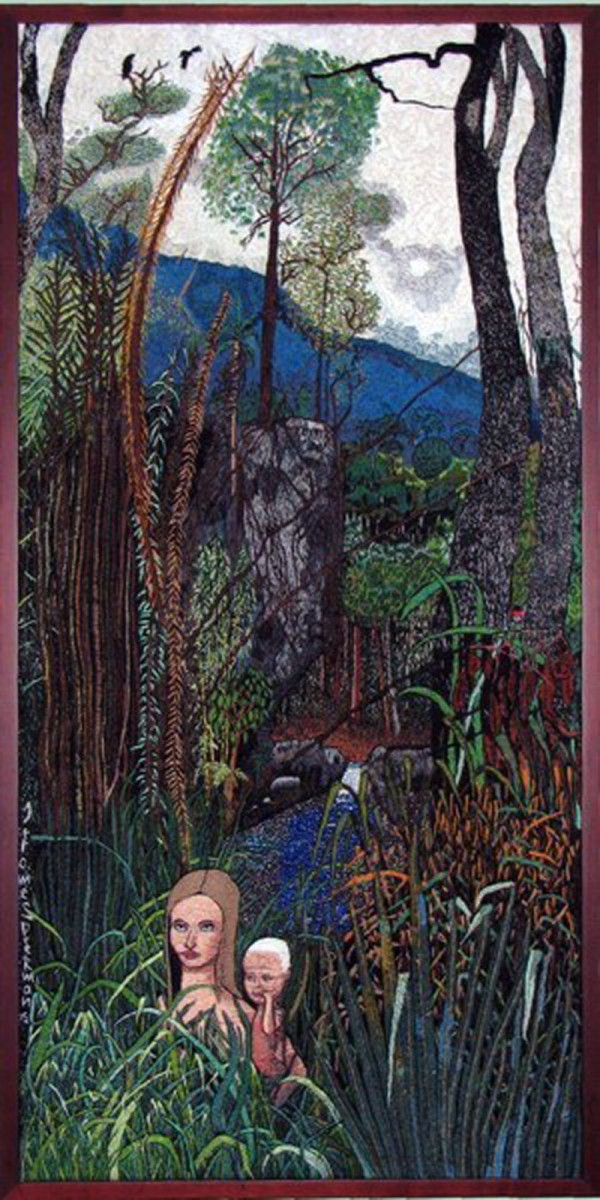