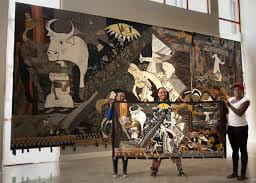 Picasso’s Guernica is a mural sized oil painting on canvas measuring 7.76m x 3.49m. The painting is done in a palette of black, white and grey and shows the suffering of the people of the town of Guernica after they were bombed by the Fascist forces in Europe at the request of General Franco. A gored horse, a bull, flames, and a woman grieving over a dead child are some of the images symbolising the horrific aftermath of the attack. Many art critics regard this work as one of the most moving and powerful anti-war paintings in history.

As we’ve seen with the Tapestry in the previous post, the artists of the Keiskamma Trust uses well-known works of art as a reference to tell their own story. By recreating famous works of art, they process, record, give a voice to their own truth, and their own suffering and stories of survival. 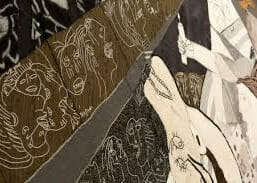 The Keiskamma Guernica is done in the same style as the original but instead of depicting the instant horror of conventional warfare, they reflect on the slow destruction of their community by the ravishing effects of HIV/AIDS, poverty, unemployment and a lack of government support.

“In the village of Hamburg in the Eastern Cape of South Africa the suffering does not scream as it does in Picasso’s bombed-out scene, rather they ceaselessly mourn, pray and persist, but too often submit to the relentless disease, and they die, un-recounted.”

This project is the same size as the original but done in applique and surface embroidery. The artists using the same colour palette, created the grey and brown background from the blankets of patients who had stayed at the Keiskamma treatment centre, traditional Xhosa skirts, beads, and hand-made felt. 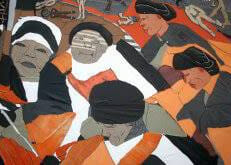 Carol Hofmeyr, the founder of the Keiskamma Trust and Art Project, initiated the project as a way to deal with her own, and the community’s, anger at the helplessness of their situation. Carol, an artist as well as a medical doctor has first-hand knowledge of the health disaster that was playing out around her. She started the Art Project in 2001 to help the local women to deal with their pain and hopelessness. In most cases, the women were on the receiving end of all the pain. They were the ones taking care of the sick, who had to feed the hungry without any or very little income, who had to bury the dead, who had to mourn the loss of husbands and children, who had to wipe the tears of their remaining friends and family. With Carol’s help, they not only found an outlet for their grief, they secured funding for treatments, and started earning an income from their art. 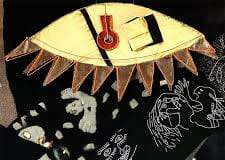 In the Keiskamma Guernica birds, a symbol of hope to the Xhosa people was added flying over the scene. White beads, a symbol of peace and prosperity, were sewn onto the artwork. The bottom edge of the Guernica is decorated by a collection of 4cm x 4cm metal plaques bearing the names of those who died and were mourned by the artists working on this project. “The metal plaques shine when they catch the light or the sun. They remind us not to forget,” says Nomfusi Nuganu who made each plaque. “Doing it made me feel the message with my hands. This is the message we have to share with the people.” 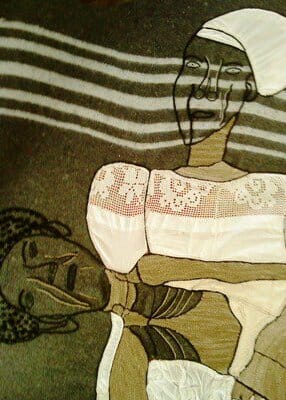 Confirming Carol’s belief that creating art will give the women hope and help them built their self-esteem, Nombusela Malumbeyso one of the women working on the project, says “seeing the finished product of something that you did not know you could do – it is like it did not come from our hands.” This is what hope does. It allows you to be so much more than you could ever dream.

There are currently five copies of the Keiskamma Guernica. The original full-size one and four smaller versions that were made on commission. Dr Nicola Ashmore, an art and design historian from Brighton in the UK, made a study of collective remakings of Picasso’s Guernica. She concludes, “The Guernica’s humanitarian message is a thread throughout these remakings, calling for solidarity and compassion that transcends borders.” An apt description of not only the Keiskamma Guernica but all that the people of the Keiskamma Art Project stands for.

Ansie is a textile writer and editor currently based in Dubai, United Arab Emirates. She is a regular contributor to several international art and textile publications. Her textile blog, The Fabric Thread, will soon be relaunched as a textile travel blog. Her motto is: Talking Textiles - Crafting Community - Stitching Stories.