is an American visual artist from Pittsburgh, Pennsylvania, whose practice includes painting and installation with a special interest in textiles. 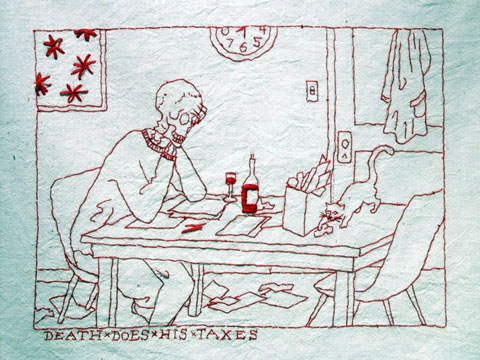 She exhibits at O. K. Harris Gallery in NYC and is represented by BE Galleries in Pittsburgh. Her work has been exhibited widely in galleries and museums including  The Carnegie Museum of Art, The Andy Warhol Museum, The Urban Institute for Contemporary Art and the Rundetaarne in Copenhagen. The artist has been selected for residencies in Spain, Italy, and Australia as well as throughout the United States. Ms. Mazziotti’s work has been featured and reviewed in Chicago Art Journal, Pittsburgh Post-Gazette and ArtNews. 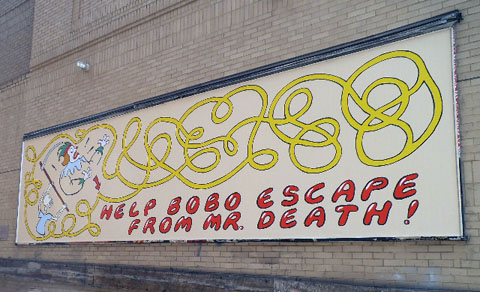 Mary has created a range of embroidered narratives featuring the exploits of Death, his wife, and other similarly gruesome subjects. 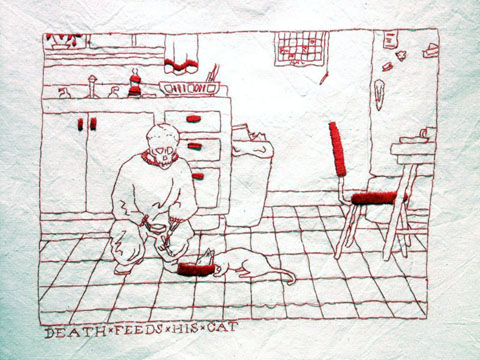 “Memento Mori: A Day in the Life of Death – Twelve embroidered panels : image area 8” x 11” “These embroidered panels show our old friend Death going about his daily tasks. Whether he’s at work or play, kicking back or getting the job done, he’s just trying to get along like you and me! Death is not necessarily the menacing figure in the black hooded shroud with a scythe. Death might just be the guy next door or the woman in front of you at Starbucks. 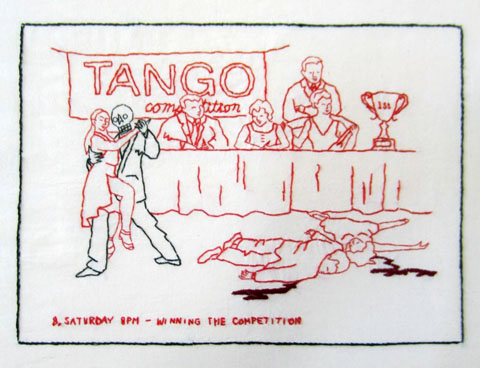 “Death’s Weekend – After a hard week at work, Death heads into Friday with hopes of a relaxing weekend. Just like you and me, he’s kicking back, getting his groove on, but also killing many people. This is a companion piece to “A Day in the Life of Death”. 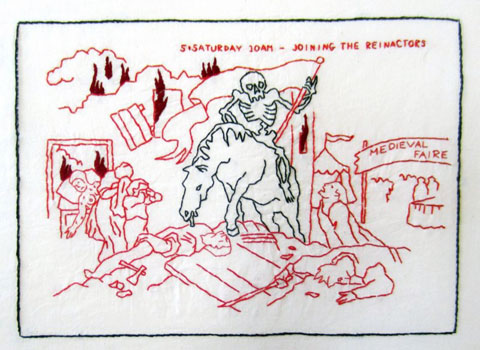 “The Rake’s Progress – Embroidery thread on muslin/ eight panels/each 13” x 10” “This is a contemporary take on the 18th century etchings by William Hogarth that followed Tom the Rake through his self-induced vicissitudes from gambling dens, brothels and, inevitably, to Bedlam. Here a Levi Johnson-like figure surrounds himself with sycophants, false friends, Nigerian computer scammers, and the ever present figure of his moral, spiritual and physical Death.”

I really love Mary’s work. The simple illustrative style of the hand embroidery is charming and nostalgic, a perfect counterpart to the darkness of the subject matter.   Mary’s work not only takes a light-hearted look at some of the darker characters in our mythology, but is critical of modern society at the same time. 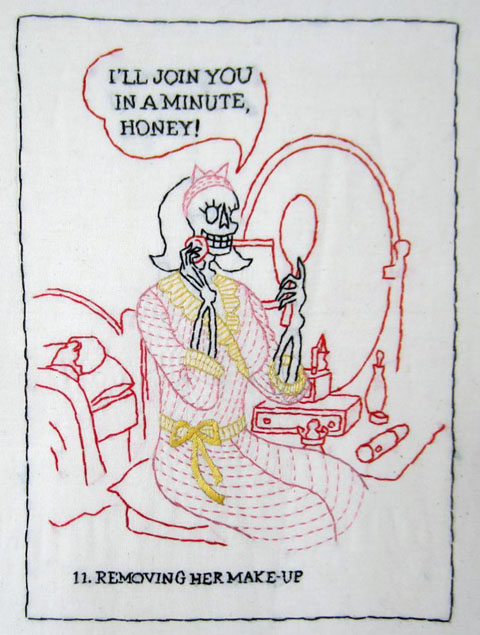 Referencing Americana, Soviet propaganda, and historical literature, there is so much more to this work than meets the eye. It really is worth taking the time to visit Mary’s website, to read through the darkly comic narratives that she has created. I guarantee you will be left with a smile on your face. 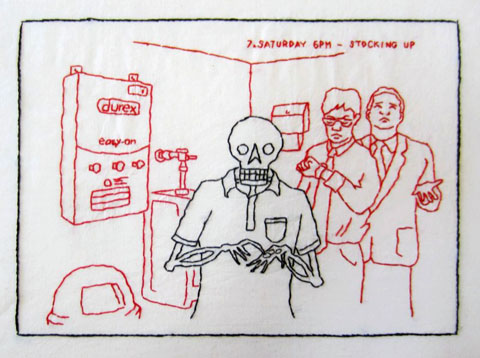