Welcome to eMbroidery, a series of interviews with male embroiderers. This month, Paddy Hartley. 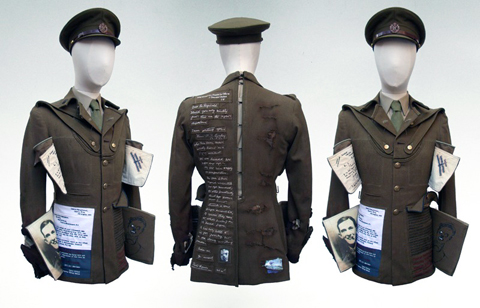 Main embroidery medium: I use Bernina Designer digital embroidery software. I used to apologise for being a ‘digital’ embroiderer, but haven’t for a long time as it’s a whole other skill set in itself.

Noteworthy projects or pieces: All of the pieces I made as part of Project FaÃ§ade, my own personal response to the medical records of facially injured WW1 servicemen. In particularly, the pieces about the lives of servicemen William Spreckley and Henry Ralph Lumley. 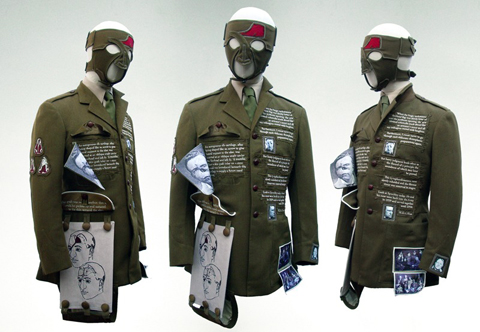 How did you come to be an embroiderer? Through necessity. Embellishing the military uniforms I work with representing the facially injured seemed logical for many reasons. The surgery they underwent involved stitching the outer fabric of the body, the skin. In addition, the servicemen who underwent multiple surgeries where hospitalized for months, years at a time, so rehabilitation played a major part in their recovery, many of whom took up embroidery. Up to that point Id never considered embroidery as a medium I could use but it lent itself to the work well.

What does it mean to you? Throughout the making period of Project FaÃ§ade it was an appropriate means to an end. I had a 1-year making window in which to embellish the 16 uniforms with which I was working, to embroider clear narrative in both images and text. At the start of the project I had never embroidered by hand, let alone digitally, so getting to grips with the software and translating it to fabric was a massive learning curve.

Where do you like to work? Wherever I can concentrate, increasingly I’m finding that I need silence to work. No email, no mobile. Bliss! 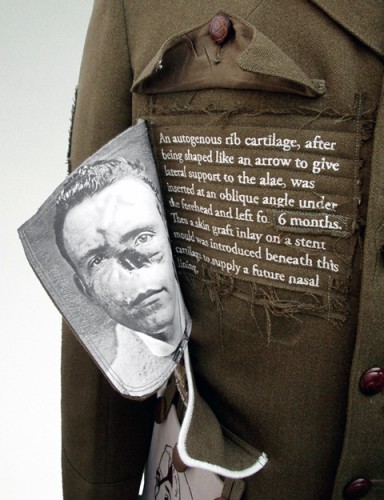 How do people respond to you as a male embroiderer? Usually with a raised eyebrow, but then with fascination because of the subject of the work, particularly when who you think the least like people engage with the work. Like the guys in their 40s/50s who look like builders, being dragged around a group exhibition by their wives which featured some of my work. On more than one occasion I’d see these guys pacing the space like the walking dead until they saw my work and they could engage with the work because of the subject of the work which just happened to be embroidered. You can engage anyone with using any media or process so long as they have an interest in the subject.

Who inspires you? Right now, the students I meet around the UK when I’m guest lecturing. With the phenomenal rise in tuition fees, you have got to be committed to what you do if studying the subject Id going to land you in such eye-watering debt. Arts education and where you get it in the UK is undergoing an incredible change right now and in the years to come as many creative industries courses will close as a result of students being unwilling to get into such massive debt for a qualification in an industry which essentially doesn’t exist. As an example my own training in Ceramics is becoming an unviable subject for Universities to offer so what was a healthy number of under and post graduate courses has become a handful. I think we are going to see a very different breed of artist, craftsperson and designer emerge over the next few years in the UK. Ultra ambitious with a very astute commercial eye and many of whom will not be University educated and they are all going to give us a real run for our money! 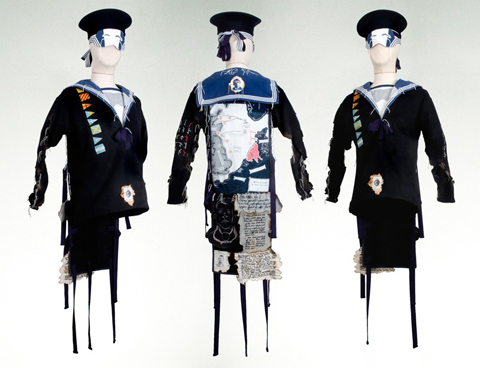 How or where did you learn you learn how to stitch or sew? Im totally self-taught but if I need advice, I have friends who I can fling the odd question to if Im scratching my head, but usually, I can work out a solution. It may not be a conventional solution to a problem, but if it works for what Im doing, that’s fine by me.

How has your life shaped or influenced your work? It’s very much the other way around, what I do has made me the person I am and each project I work on changes me (for the better I hope) just that little bit more.

What are or were some of the strongest currents from your influences you had to absorb before you understood your own work? In making the work about the facially injured servicemen for Project FaÃ§ade, memories of the men shared by relatives was a revelation, but had to be handled with immense sensitivity. I learned to not include all the gory detail, that’s sensationalist and exploitative and disrespectful to the men and their families. So I learned to distill their stories down to fragments which the viewer has to piece together.

It would have been easy to have embellished the uniform pieces with lots of images of the subject with his graphic injury and images of surgery. That would be crass. I kept the use of such images down to a minimum and often placed them discreetly on the piece. 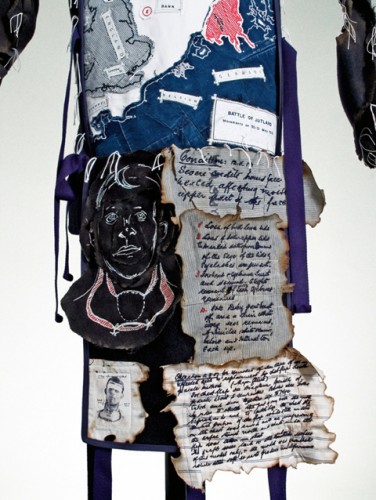 Do formal concerns, such as perspective and art history, interest you? I cant say I have much interest in art or art history so it doesn’t really play a part in what I do. I relate to the subject of the work directly rather than looking at how others may have dealt with similar subject matter or material. I used to feel guilty for saying Im not much of an art lover. Saying you are an art lover is like saying ‘Im a TV lover’…I like some art, just like I like some TV. Most of what is around is dross, lazy and badly made, but there is the occasional gem which sparkles every now and then.

Do you have any secrets in your work you will tell us? Yes, when a piece feels like it needs a little something more, take something away instead.

How do you hope history treats your work? Kindly, if it is remembered at all. 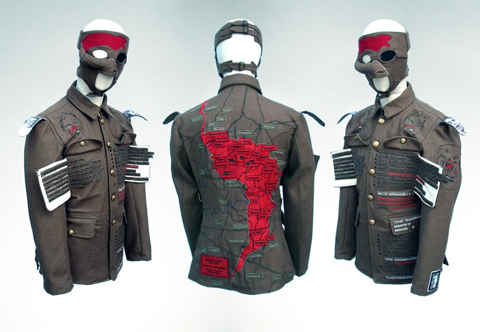 Where can we find you and your work?