Seeking refuge from the harsh Welsh winter, The Hiber-Nation will be descending on Wales Millennium Centre

this December. Hand-crafted by the inimitable Felt Mistress

out of new and vintage fabrics including tweed, wool and flannel from Welsh mills, the band of quirky, colourful creatures are soon to be found huddled in stairwells and suspended from ceilings around the Centre.

Louise Evans, alias Felt Mistress, has crafted over 20 x 3D pieces for the exhibition, including 3 x 8-10ft works: a snow queen, a huggable yeti and a woodland guru.

, Louise’s partner and a regular illustrator for the Guardian newspaper. Around 30 of Jonathan’s original works, – a collection of watercolours, acrylics and ink drawings – depicting the characters and the landscape they inhabit, will also be on display during the exhibition. Video content introducing the characters will also be presented on the Centre’s projection wall. 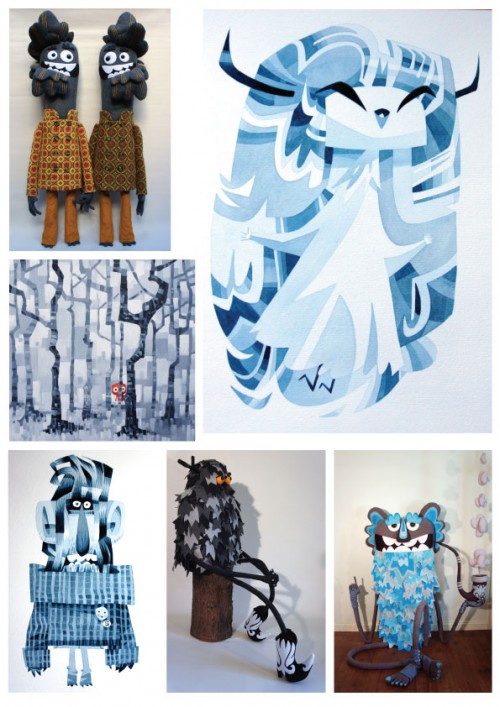 From her studio in North Wales, Felt Mistress has created a legion of felt characters for the best part of a decade. While both her work and Jonathan’s has been exhibited all over the world in cities including Osaka, Los Angeles, Berlin and London, The Hiber-Nation exhibition is to be the Welsh-born couple’s first in their homeland. In 2010, the couple presented a Christmas window display at Selfridge’s iconic Oxford Street store.

Louise Evans originally trained in fashion design and millinery and has brought many of the skills learnt through years of work as a couture dress maker to the world of character design. As well as original Felt Mistress characters, Louise has collaborated with a variety of artists including Jon Burgerman, Ben Newman and Pete Fowler. A 400 page retrospective of her work, “Creature Couture – the Art of Felt Mistress” was published in December 2012.

Along with providing illustrations for the Guardian, Jonathan Edwards has produced illustrations and comic strips for magazines and publishers around the world. His artwork also appears on the covers of records by artists such as The Black Eyed Peas and The Jungle Brothers.

Lousie Miles-Crust, Head of Programming, said: ‘We’re very excited to be bringing the work of Felt Mistress and Jonathan Edwards to the Centre this Christmas. Their work is both visually stunning and fun, so we hope that art lovers and families alike will enjoy the exhibition. It’s also great that we can host the homecoming exhibition for the talented Welsh duo and display some of the truly unique and exciting art and design work to be coming out of Wales.’