Welcome back everybody! As promised, here’s part two in our three part look at goldwork. Last time we looked at the origin of goldwork, and its use ecclesiastically and in the royal court, along with a few mummies. This time we’re going to open our atlases and look at goldwork traditions from around the world. Obviously, this will not be and exhaustive list, but I alway cite my research at the end of the article so you can learn more if you are so inclined. 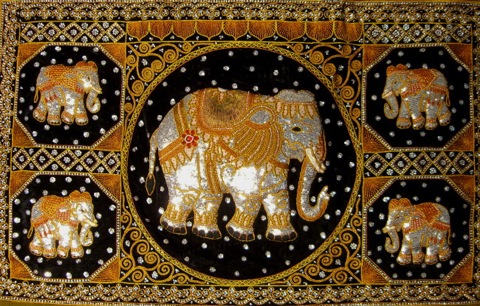 The overall design is heavily decorated with sequins, but the outlines and more subtle decorative stitching is done in goldwork, and sometimes silverwork. Usually the tapestry has religious significance (Buddhists and Hindu), often depicting animals that are considered auspicious. To see how these are made, start to finish, click HERE.

Next we have the dohlja from Tunisia. According to Asian Embroidery, the dohlja is a golden garment that protects the bride’s fertility. “Across North Africa, brides and bridegrooms are considered especially vulnerable to the evil eye, so garments like dohlja with their especially light-reflective surfaces are believed to absorb and deflect negative forces away from the wearer. To fully protect the bride, images to promote fertility and bring happyness are also worked into the dohlja.”

These photo from The Shining Cloth show a detail of the garment adorned with golden fishes, a luck and fertility symbol. In the larger photo we see beadwork, sequins, and couching done with gold thread. Tunisia is interesting because according to Embroidered Textiles, goldwork is the principal type of embroidery found there. This qmajja (marriage robe) also showcases goldwork couching and talisman designs by way of the hand of Fatima. (They’re hard to see, but they crop up from the embroidered panels on the bottom.) 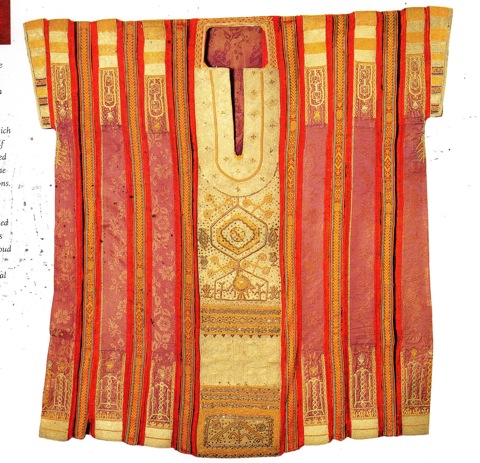 Here we have a style of embroidery called zardozi. The name comes from the Persian word for gold, “Zar” and sewing or embroidery “Dozi”. This type of embroidery originated in India and Pakistan, and it is said to have been practiced since the time of the Rig Vega. The Rig Veda was composed over a few hundred years between 1700-1100 BC. In the early 17th century, it was used primarily to adorn royalty, as well as court wall hangings and homes of the wealthy. 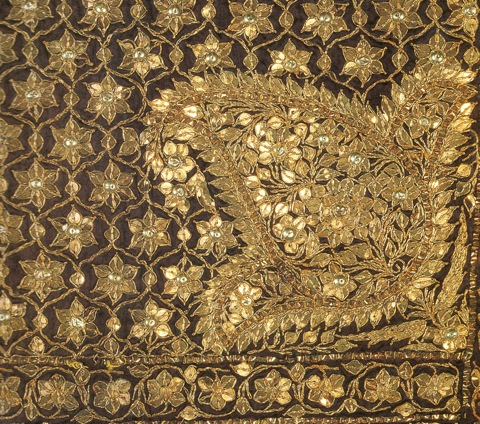 During the reign of Mughal Emperor Aurangzeb (1658-1707), the royal patronage that extended to craftsmen was stopped, which led to a decline in this work. Then, during the industrialization of the 18th and 19th centuries, many of the craftsmen took up other occupations. I did find a wonderful video of craftspeople creating the splendid pieces, and it’s interesting because they also talk about the economics of their work. Although they create these pieces, they are prohibitively expensive and therefor unaffordable to the makers. Most are sold as exports. Click HERE for video, called Recession Affects Embroidery Trade.

Next up we have a sarong (tapis) from the Kauer people in southern Sumatra. Embroidered Textiles says that Tapis are ritual skirts and are often adorned with stylized motifs in between the bands of ikat. The Shining Cloth has a wider definition of tapis, essentially stating that it is any ritual garment, not necessarily a sarong.  Ships are popular, and mica sewn in the shisha style is often added. Designs varied by tribe and are often adorned with couched goldwork. 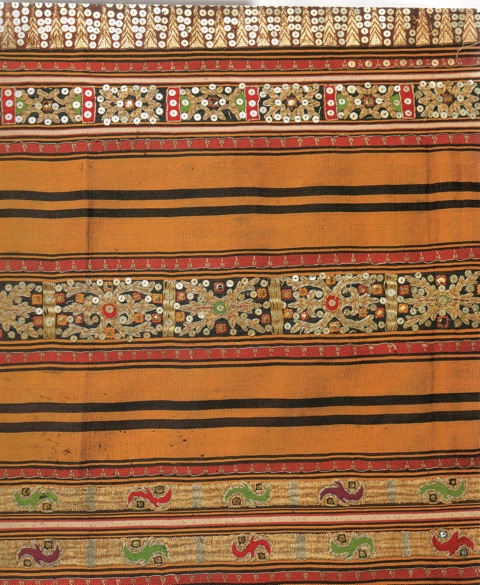 Speaking of Sumatra, below is a wedding photo of a Minangkabau couple. Wedding tapis are extremely lavish with couched goldwork, often worked over traditional songket weaving. Songket weaving is a type of brocade that is hand woven with metallic threads inserted in between the warp threads. 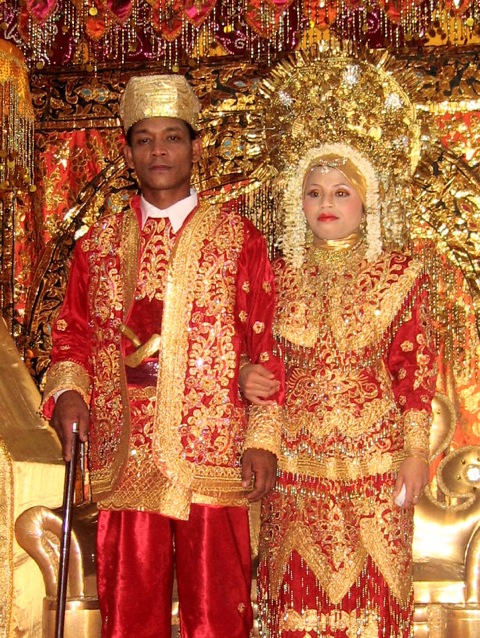 This bride from southern Sumatra is wearing another example of songket weaving with couched goldwork.

Of course we would be remiss to over look China’s contribution to goldwork. As we learned last time, China is where goldwork is said to have originated. 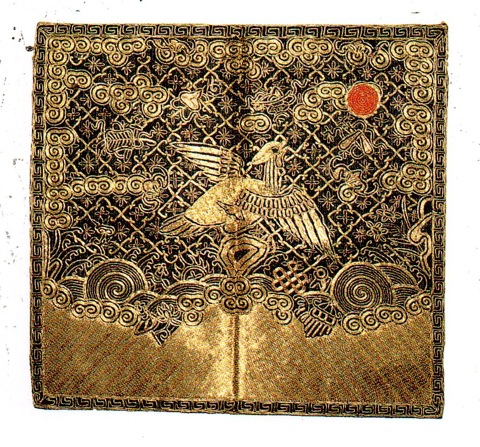 This piece is a court insignia featuring the mandarin duck that denotes a seventh degree civil official. Embroidered Textiles tells us that “Embroidered badges on the plain coats of Chinese court officials marked their rank by birds for civil and animals for military.” The piece above is couched goldwork on silk. 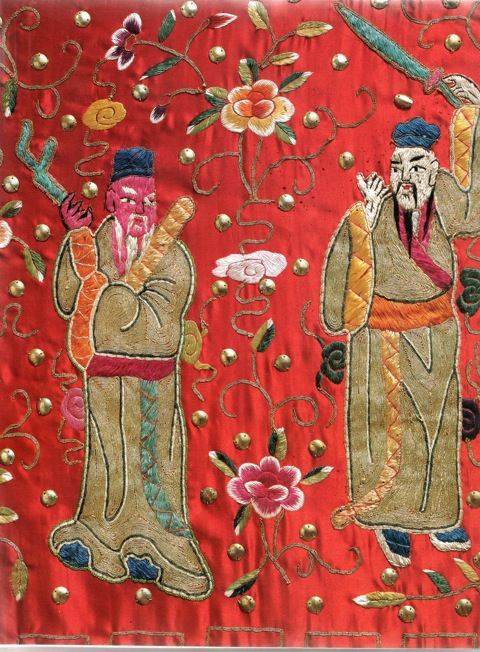 The piece above is from Hong Kong and is a detail of a larger piece depicting the Eight Taoists Immortals. Notice the couching making up their clothing. Since we covered China in the last article, I’m going to move on to Japan. goldwork can be found on everything from kimono to priests’ mantles, but I was especially fascinated by the floats in the Gion Matsuri festival. 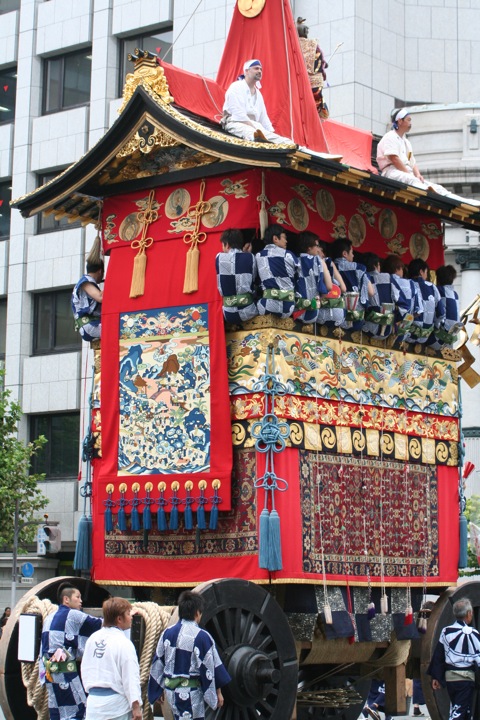 The Shining Cloth tells us “Every July an ancient festival with precious textile laden carts called Gion Matsuri occours in Kyoto. Floats are presided over by Shinto images and honor Amaterasu, the sun goddess.” 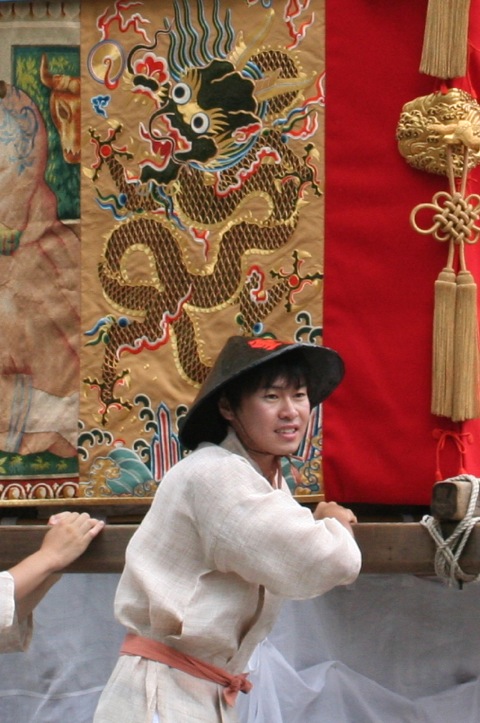 Wiki has a thorough article on the festival, and also says, “The floats in the Yoiyama Parade are divided into two groups, Hoko and Yama, and are collectively called Yamaboko (or Yamahoko). There are 9 of the larger Hoko (long pole or halberd) which represent the 66 spears used in the original purification ritual, and 23 of the smaller Yama which carry life-size figures of famous and important people. All the floats are decorated with beautiful tapestries both from Nishijin (the finest in all of Japan) and imported from all over the world. In addition to the art, there are many traditional musicians and artists sitting in the floats.” Click HERE for full article.

I know we’ve only looked at Asia and Africa in part II of this article, to the exclusion of other countries’ goldwork contributions, but like I said in part I, there is a lot of examples and traditions due to the permanence of gold. So I’m going to stop here. But if you check out any of the books that I reference, you’ll find more information on goldwork the world over.

Next time we’ll wrap up with part III, contemporary goldwork!

Books and photos referenced in this article-