Welcome to eMbroidery, a series of interviews with male embroiderers. This month, Stewart Easton 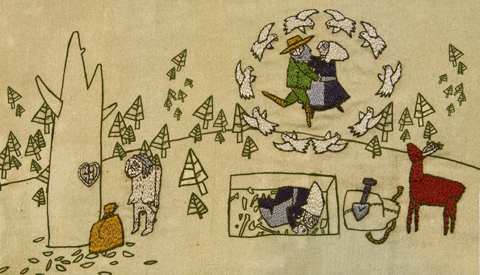 How did you come to be an embroiderer?

Whilst studying MA Illustration and Animation at Coventry University I had an experimental module where I could work/ experiment in any medium as long as it fit my research. At the time I was researching Folk Art so embroidery kind of fit my brief at the time. 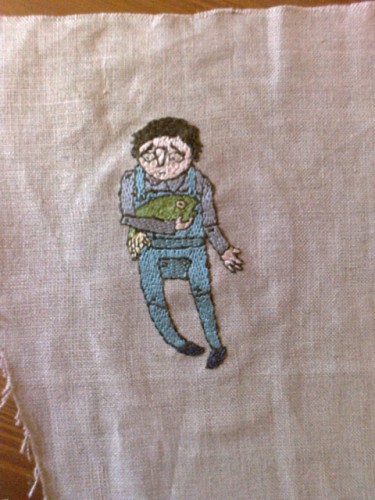 What does it mean to you?

Embroidery allows me to make work which is unexpected (for a gent) and adds a certain dynamism and angle to the work.

I have a couple of cushions which are placed in front of my record player in the back room. Once a record is on and I’m all set up time tends to stop.

How do people respond to you as a male embroiderer?

On the whole it’s a positive bag. People tend to tell you that they think more men should sew and how great it is that I sew. Though to me it’s nothing strange it’s no different to using pen and ink. 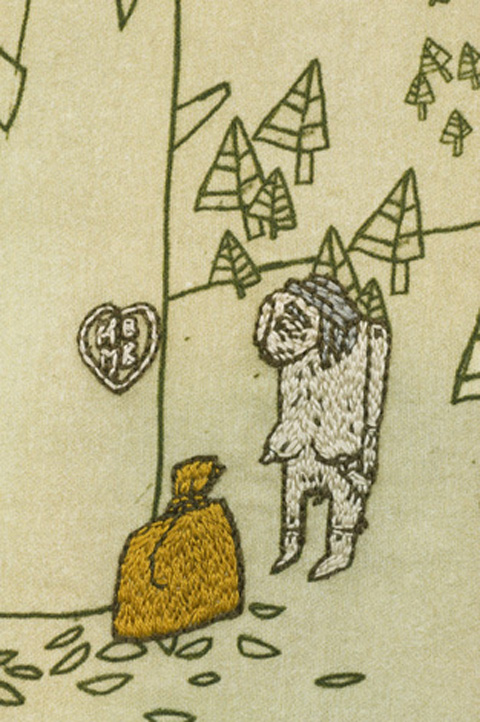 How or where did you learn you learn how to stitch or sew?

I taught myself how to sew out of a tiny little book with 32 stitches in it. Though I only use 3 and really don’t want to learn anymore.

Are your current images new ones or have you used them before?

A lot of my stitch works are reworks of my pen illustrations. I tend to go over old drawings I have made and transfer them in stitch due to this my embroidery is very illustrative.

How has your life shaped or influenced your work?

I always wanted to be different and not thought of as a typical ‘Boy’.  This wanting to be different has subconsciously fed into my desire to use embroidery as a medium for making art.

What are or were some of the strongest currents from your influences you had to absorb before you understood your own work?

This is an on-going process and really depends on the project I am working on. For instance with my Four Tragic Tales project it wasn’t until almost a month after the work was installed in the space that I realised that I had wanted to make a concept album in stitch. It’s the time away from the work that I get to see the different strands and links to other works be it links to my own or to others. The previous smaller projects tended to be projects where I was teaching myself the craft of stitch and storytelling. 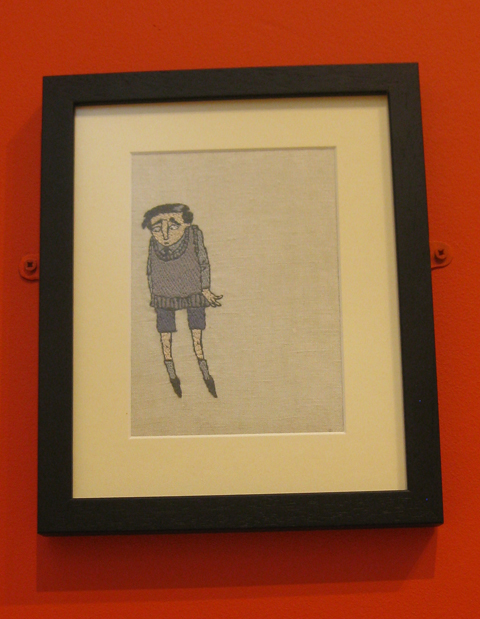 Do formal concerns, such as perspective and art history, interest you?

Not as much as tradition interests me. I’m more concerned with the feelings which tradition evokes within me. The maker sat stitching by the fireside; work songs and communities rituals interest me more than the social history which fed into a certain piece of work. I know that the social history is all of the above but it’s the dirt more than the learned which gets me going.

What do your choice of images mean to you?

They mean everything really. I try to make work which I would like to see myself.  Doesn’t always work that way though!

Do you look at your work with an eye toward it like what can and can’t be visually quoted? In other words what you will or won’t cut out?

With each piece of work which I have usually made one or two attempts which I am not happy with. It will usually be something as daft as the weight of a line or the angle of a hand. To others these inadequacies are not there but I know that they are. Due to this the pieces shown I’m happy with. 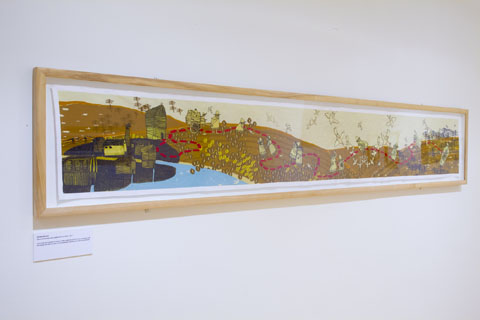 Do you have any secrets in your work you will tell us?

As I said a lot of my stitch work comes from old illustrations. These Illustrations usually stem from my times of freaking out with worry about some lame obstacle….. I won’t tell more I’ll let the folk who see the work try and figure what’s been worrying me ha ha ha!

How do you hope history treats your work?

As a tidy stitcher who looked like a tramp!

…..or he was bloody good

…..or the dude could sew and draw!

Where can we find you and your work?

and is as the title suggests four rather sad stories, each spanning across three meters.

The second is part of a group show in the Lake District UK called “WOW: Wonder of Wool and the Art of Knit and Stitch”. It’s part of a show based around wool. I have one piece in the show a hand embroidery using wool. It has some super cool wool artists there.