Hello everybody! This week I’ve decided to write about tatting! Confession. I know nothing about tatting. I have never tried it, only a few of my books talk about it, and I only know one person who’s tried it. So, to the readers who are tatting enthusiasts, please forgive my ignorance and clumsiness. I also welcome any additional information or corrections. Feel free to use the comment section. 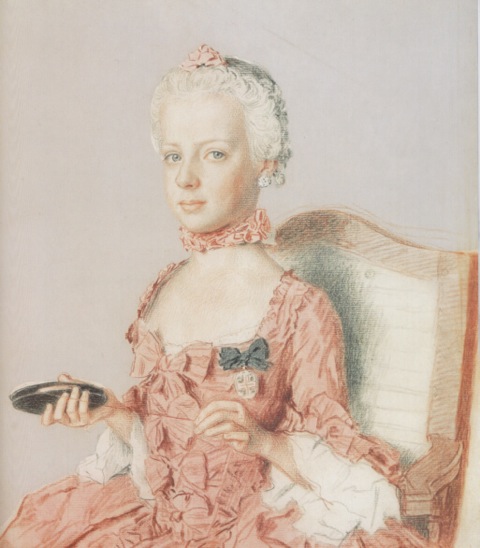 One of the problems I ran into while writing this article, was finding references to tatting in my books. Obviously the contemporary textile books would mention tatting, but my books that were published before 1900 don’t say anything about it. That’s where the Scooby Gang Mystery started. I could find painted portraits of fancy ladies, all pre 1800’s, working with shuttles, but no written references from that time period. So after spending days reading Needlework as Art (1886), and The Lace Book by N. Hudson Moore (1905), and A History Of Lace by Mrs. Bury Palliser (1869), I was ready to give up. Then I cracked open Needlework Through History by Cathrine Amoroso Leslie and she says, “…the word “Tatting” does not appear in English literature before 1842. Because of the lack of  early documentation of the word tatting and differences in appearance between knotting and tatting, some researchers believe that tatting is a completely separate form of needlework that came about on is own.” 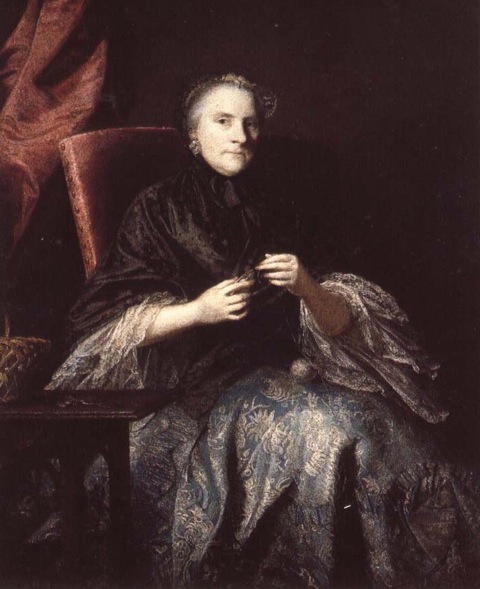 Well that explains my difficulties, then. Instead of delving into knotting, or other types of lace, let’s look exclusively at what tatting is. “Tatting is a lace-like needlework made by knotting with a shuttle and thread. Knots and loops for picots, which are then drawn into circles and semicircles. The same effect can be created with a needle and thread, which is known as needle tatting.” -Needlework Through History

But don’t fret! I did find a couple of classic tatting books to share, and I’d thought we’d take a look at the authors and even some patterns. First up we have Eleonore Riego de la Branchardie. She published her first book at age 12 in 1846! Although she is most recognized for her work in crochet, she published 13 books on tatting. 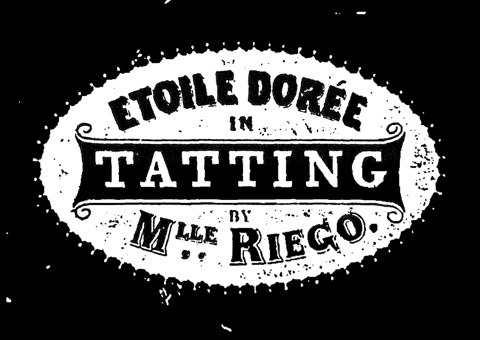 She was eventually appointed Artiste in Needlework to the Princess of Wales in 1800’s, and went on to develop the “continuous thread” technique, (not that I know what that means…) Here’s a special treat for you adventurous types, if you click HERE, The Project Gutenberg has her entire book, “Golden Stars in Tatting and Crochet” (1861) online! 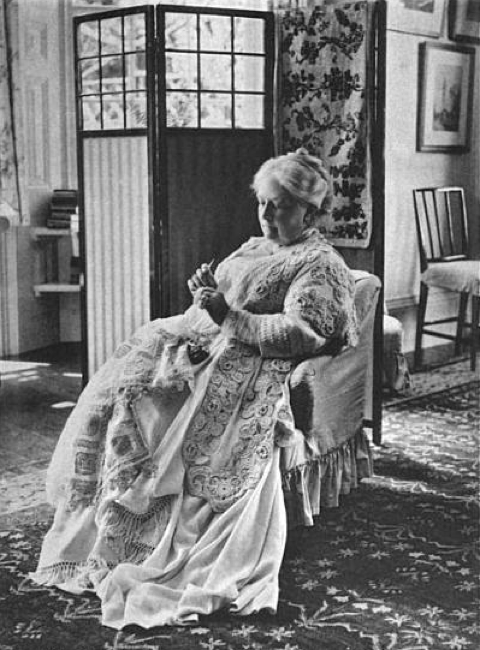 Lady Katharin Luisa Hoare, plate from her 1910 book, The Art of Tatting

Lady Hoare’s book, “The Art of Tatting”, was both a pleasure and a relief to find. She says, “To tatting, I can find but few allusions in either English or foreign literature. There is, however, a poem of Sir Charles Sedley’s, published in 1707, called The Royal Knotter, evidently intended as a skit on William and Mary. The following lines are eveidently pointed at the queen’s homely habits, one of which, it is interesting to note, is tatting- 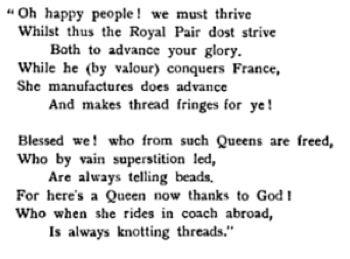 There’s so many things I love about this book, from the illustrations- 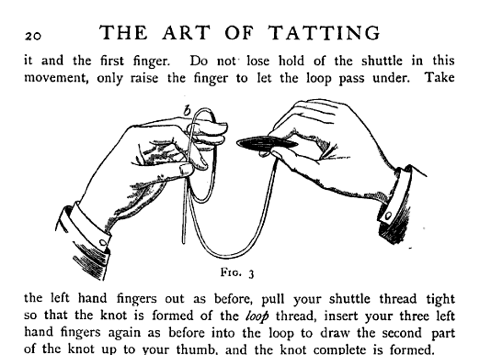 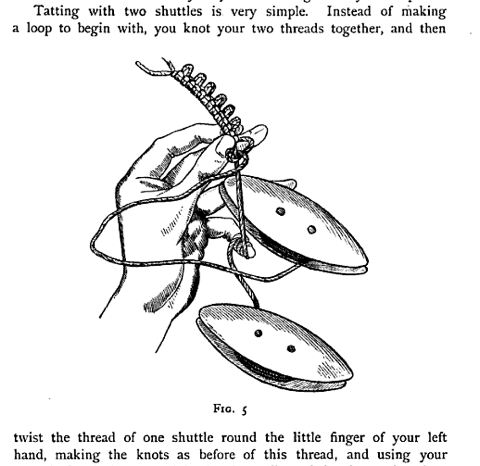 As well as the beautiful examples of her work- 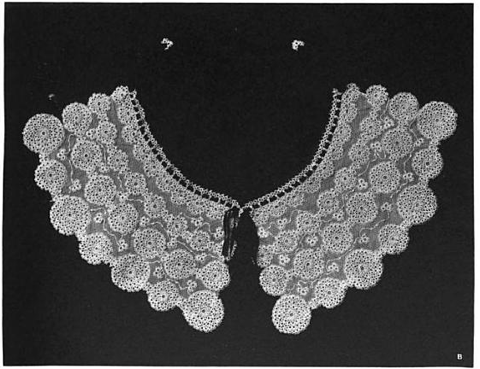 All and all her work and words are wonderful, but I was thrilled when I read the introduction by Carmen Sylva, which was the literary name of Queen Elizabeth of Romania. 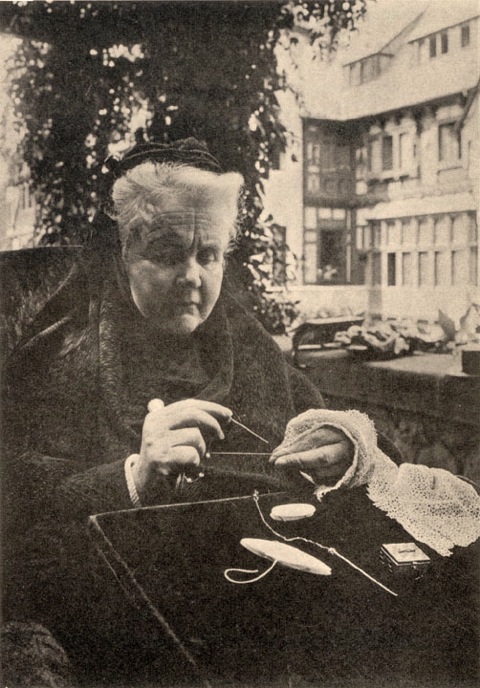 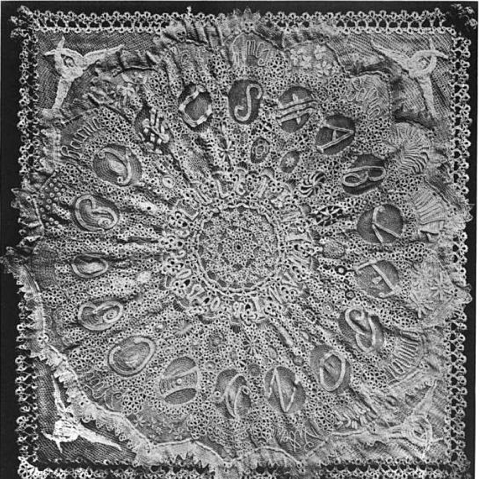 But she also wrote the introduction, which is fascinating- 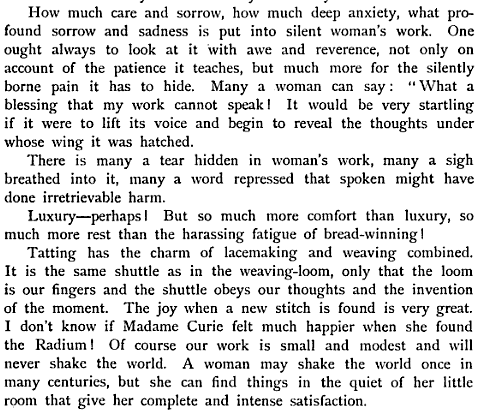 It has taken every ounce of self restraint to not copy and paste the entire 4 page intro.

I know this has been a strange post, less about history, and more like a book report, but the few written texts I did find on tatting and its early popularity are absolutely fascinating. Next time I’ll be back to normal, and we’ll look at contemporary tatting, I promise!

All references for this article are listed in the text.