To embroider; it can simultaneously stand for puffing up and altering the truth of one’s statements as well as for adding decoration. Though I’ve been known to tell tales about my own time stitching, the truth is that I really have taken it quite seriously; as I’ve started to teach embroidery digitizing face-to-face, I find myself frequently defending my claims, particularly as I place a great deal of importance on some of the finer points of the craft, testifying to the importance of these details in the commercial sphere. As much as it pains me to admit it, I know that it’s not always the tiny details that make or break a piece, but over my career, I can find enough examples of the times that these fine points did matter, that I continue to teach them and vouch for their importance. In the interest of yet again claiming the critical nature of those techniques I’ve spent a year perfecting, I decided to plead my case again here. Here are three ‘unimportant’ details about machine embroidery that I think make all the difference.

Anyone who has read a single article from me about the subject of digitizing has likely realized that I think that embroidery is always best when it uses the nature of thread to intimate depth and dimension; one of the key ways to bring that dimension about is through layering. The eye naturally sees that an object blocked from view by another object is further away from the viewer than the one doing the blocking. The easiest way to get the natural shadows, highlights, and occlusion that sends objects back into the picture plane in your embroidery is to literally build from the back of the scene in your design toward the front, allowing objects to literally overlap somewhat in the areas natural to the image. It’s free dimension without the difficulty of hinting through shading, drawing, or by straining any other artistic technique.

As a corollary to this, I take great care in my medieval Scandinavian and Celtic pieces to treat the overlaps of interlaced lines and figures with care, making as many of them true to form in the thread as possible so that objects really travel under and over at junction points as possible. Though there are myriad ways to fake it, nothing like real overlapping can give you the sense of actual interlacing objects, even if one must sometimes torture the order of their design’s run somewhat to make it happen.

I always try to reduce my stitch counts and just cover areas with as much stitching as I need and no more; to this end I’ve tested numerous underlay styles, combinations of such with differing stitch angles and lengths, and run swatches and tests in different colors and on different materials to get my coverage ‘just right’. In truth, this does not, and is not intended necessarily to affect the look of the finished piece. If I’ve done my work correctly, one won’t notice a difference between my light-handed piece and one with no regard for reducing density.

The difference is apparent because so many of my designs are made to be worn. I reduce the amount of stabilizer to a minimum and keep my designs light, because I want the garment on which it resides to stay comfortable, to be pliable, and to flow. The wearer may not even know why they prefer my piece, short of a general tendency to pucker less, but they will have felt the care taken when the garment is worn and the decoration is not cupped, distorted or stiff to the touch.

This is the kicker; so many people have marveled that on my 18th year of digitizing, I could still be found working on name setups and tweaking text. Some had said that they figured someone with less experience would be better suited to banging out names on a keyboard, but the truth is that I have always seen personalization as one of the most important parts of what we do.

There’s nothing more private or singular than a name, and in many cases, the pieces that we personalize are made specifically to be heirlooms. Even when using these pre-designed lettering fonts that come installed in our softwares, I always stopped to fix the ligatures between letters, clean up the curves, and kern. In my mind, I can always see the graduate of today reaching into the closet for their letter-jacket some 20 years down the road- when that person does, they’ll see a name that was cared for, at least on my watch.

In the end, I have always known that our work was not surgery nor science. In my commercial world, it can’t even necessarily be called art; that said, the ephemera- the evidence of how we lived and the ideas and affiliations to which we belonged does have some weight. I may have spent a bit too much time worrying about the way a letter looked, or a knot twisted, or a polo-shirt felt after a day in ‘business casual’, but I’d like to think that the care will remain evident as long as the thread holds out. Even if it weren’t true that the quality and care was cited many a time for why my company landed a client, that care and craft stands for something. 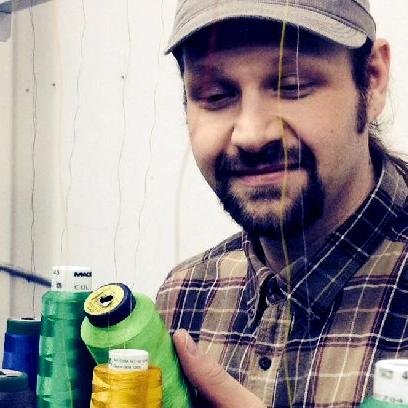 Erich Campbell is the Partner Relationship Manager at DecoNetwork, an award-winning machine embroidery digitizer and designer and a decorated apparel industry expert, frequently contributing articles and interviews to embroidery industry magazines such as Printwear, Images Magazine UK, and Wearables as well as a host of blogs, social media groups, and other industry resources.

Erich is an evangelist for the craft, a stitch-obsessed embroidery believer, and firmly holds to constant, lifelong learning and the free exchange of technique and experience through conversations with his fellow embroiderers. A small collection of his original stock designs can be found at The Only Stitch

Erich Campbell is commercial machine embroidery educator, an award-winning machine embroidery digitizer/designer, and a decorated apparel industry expert, frequently contributing articles and interviews to embroidery industry magazines such as Printwear, Images Magazine UK, and more as well as a host of blogs, social media groups, and other industry resources. Having done everything in the industry from operate machines, to build and manage eCommerce properties, to create and manage partnerships between industry players, Erich takes lessons from the commercial garment decorating world and brings them to everyone. Erich is an evangelist for the craft, a stitch-obsessed embroidery believer, and firmly holds to constant, lifelong learning and the free exchange of technique and experience through conversations with his fellow embroiderers. A small collection of his original stock designs can be found at TheOnlyStitch.com