Welcome to eMbroidery, a series of interviews with male embroiderers. This month, Whatever James. 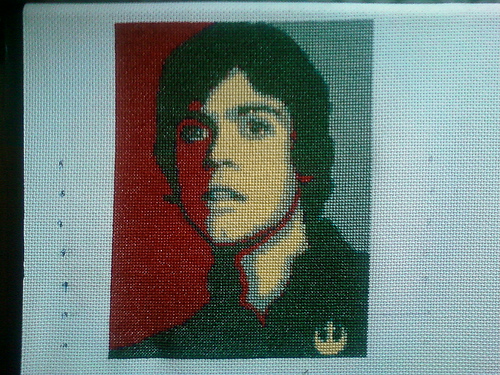 Main embroidery medium: Cross stitch, baby! Thread and Aida. But I got some of that cloth you tear or wash away, so I plan on seeing what bad things I can do to my clothes soon.

Noteworthy projects or pieces: The pieces I am proud or sentimental about are “Punks Not Dead”, “How Could Hell Be Any Worse”, Heath Ledger as The Joker, and my Star Wars Valentine I made for Windy.

How did you come to be an embroiderer? I was dating and trying to impress a crochet teacher. I asked her to teach me something and I just picked a cross stitch kit. That was 2004. After we broke up I kept at it a little, just to pass the time, but I don’t think I ever really finished a project until 2007. After I found Julie Jackson’s Subversive Cross Stitch in a bookstore I did her “Boo-Fucking Hoo” pattern. It lit a fire under my ass and blew my mind! I’ve been doing the voodoo I do ever since!

What does it mean to you? I don’t know. In a large scale sense I am really stoked to be in such a cool, creative and SUPPORTIVE community of not just cross stitchers or embroiderers but everyone bringing their craft, whatever it may be,  to the modern times. Much more personally, it is the creative outlet I never knew I needed. It’s the “hobby” I have always wanted and it could possibly bring me to tears if I thought about how proud I am that I can stitch whatever I want and I have never felt awkward about it at all. It is one of the few aspects of my life where I do not feel I have done any wrong, nor have I compromised myself in any way…and that means a lot.

Where do you like to work? I like working outside of my house. It doesn’t matter if it’s the bus, the park, coffee shop. I stitch 90-95% at home so I just like getting out.

How do people respond to you as a male embroiderer? Positively. Most people are pretty open-minded and when they approach me, I don’t know if it is because I don’t do the cute/sweet pieces that they expect to see or if it’s that I am visibly proud of what I am doing, but it’s almost always good. Occasionally I’ll get someone like my doctor who will say “Oh, I thought only women do that” or some other dribble. I just smile and tell them I learned from a woman. But I have made things as gifts for male friends and they display them and enjoy them.

Who inspires you? In real life it is my better half, Windy and my two daughters. They make me want to try to be a better person then I would usually tend to be without them. Artistically, I am such a fanboy of katiekutthroat. I found her stuff online not long after I read Julie Jackson’s book. That’s the kind of stuff I wish I was good enough to do. Her work is so clean, so creative, and damn if I could just come up with ONE border I didn’t rip-off from her or someone else (I really suck at borders). I love her borders and embelishments, I think she is so clever in her work. Sadly, I have such a hard time talking to people – especially initiating contact – that I wrote her some goofy email back in 2007 or 2008 telling her that I loved her work and asking for any tips and I was just super excited to see someone doing stuff that I wanted to do but didn’t think I could before. But then I never sent it because I thought “who sends someone fan mail for cross stitch”? I guess I thought it would come off creepy, but I guess it’s out there now. She’s probably printing this for her restraining order.

How or where did you learn you learn how to stitch or sew? I don’t remember the details but I learned traditional sewing in the Boy Scouts.

How has your life shaped or influenced your work? My life is comprised of everything in it and it has shaped and influenced me as a person, not just my work. I like punk rock, so I stitch my favorite album covers or lyrics. Windy is the love of my life, I stitch for her all the time. The most recent is my love of Star Wars. I’ve been a huge fan forever. I’ve got every novel, most of the nerdy character/planet/vehicle guides, two Star Wars tattoos and my oldest daughter is named after an Expanded Universe character. I decided when I started I wasn’t going to any Star Wars stuff because it would just be too obvious coming from me. From February to April of this year I worked on and completed my Luke Skywalker “Hope” portrait. I created a sampler after that.
I started to look for ideas on how to stitch other Star Wars stuff and found that with like video games, tv, and so many other pop-culture subjects there was a lot of cool people stitching cool SW things. Unfortunately, unlike say video games which has a site like www.spritestitch.com, there was no site dedicated only to SW needlework. So I started a flickr group and that led to the creation of hanstitchedfirst.com where I share not only my own SW stitching but work by others that I have found. It’s completely re-influenced the last couple months of my life and a lot of my future plans. I think it’s because I would be this excited just to find a site that combined Star Wars and stitching. The reaction from those who have talked to me about it has been overwhelming. And I really cant wait for what kind of fun a Star Wars stitching community can have!

What are or were some of the strongest currents from your influences you had to absorb before you understood your own work? That I could do whatever I wanted. I saw Julie Jackson, Katie Kutthroat, everything going on at MrXStitch. I wanted to stitch whatever I wanted to do and the more I continue to realize that I can, the more I am able to channel the current I really want into my work. Working on the Star Wars stuff is different too because it is honestly the subject matter closest to my nerdy heart and so I try to really understand what I am trying to convey because I want it to be something I would want to see, as a Star Wars fan. Plus Star Wars as an influence is PG or PG-13-ish, so writing for that blog I have had to keep it appropriate for what would be the age of the entire SW audience, which I have never really worried about before but it’s probably good for me.

Do you look at your work with an eye toward it like what can and can’t be visually quoted? In other words what you will or won’t cut out? No, I don’t think so. I’ve actually edited my own work down if I felt I should. My first idea for the “Hell” piece was far more sampler-ish, I decided on a whim to see if I could do the bigger piece. I think the pieces are there. I put into them what I thought they needed. I left out the things I didn’t think they needed or maybe I just didn’t want to do.

Do you have any secrets in your work you will tell us? I usually hide one stitch uncrossed on the big pieces. It started as an accident and I never fixed it. I’ll probably never tell where they all are, but Luke’s is in his nose! 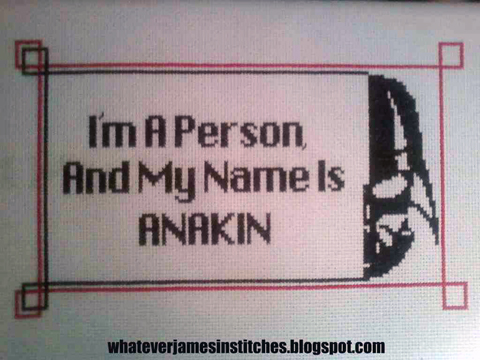 How do you hope history treats your work? I still find it a bit odd that people have taken the interest in me and my work that they have. Especially when there is so much out there that I am a fan of. I really don’t think I am ready for the idea of history treating my work in any way. I recently came across a fellow stitcher who stitched her boyfriend a video game piece that says “I Love You More Then Mario” and she said she did it after my Star Wars piece for Windy, I think that may be the best I could ever hope for. But since I started the hanstitchedfirst.com blog I have really been dedicated to the idea of a place where people interested in stitching this one subject, at least once, can be inspired and eventually share ideas and have a place to discuss it. I hope history thinks it’s a good idea too.

Where can we find you and your work? For stuff I have stitched there is my blog: whateverjamesinstitches.blogspot.com and  my flickr  account are probably the best. I try to stay active over at www.craftster.org because it’s been such a great community and now http://hanstitchedfirst.com. Where I will continue to write and hopefully grow a special place for Star Wars and/or needlework enthusiasts!