Welcome to eMbroidery, a series of interviews with male embroiderers. This month, William Schaff 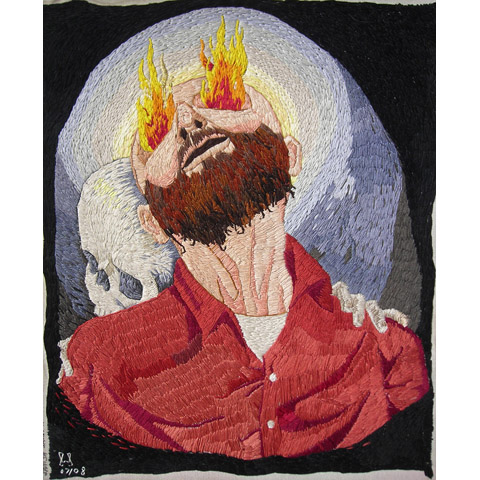 How did you come to be an embroiderer? I sort of stumbled into it, with no grand thoughts other than I knew I wanted to give it a go. Really, it was because I was watching too much television and I felt I should be doing something while watching all of this TV.

What does it mean to you? It has come to mean more to me as time has gone on. At first, like I said it was more of a way to pass time, but as I have gone on doing them, and been exposed to other contemporary embroiders I have really come to see that it has its own place as a medium that I can find a release that I can’t in other mediums I work in.

It is as if the threads bound together go on to create something a line of the pen, pencil, or brush just can’t for me. It also makes me think of my grandmother, mother, and other people in the past who have spent their time in concentration making something by hand to add beauty to their world. They weren’t calling it “art” necessarily — if anything they would have laughed off the idea they were making art — but yet hours were spent in creating something for their surroundings.

So even when my topics aren’t beautiful, I still feel happy being a part of this tradition. 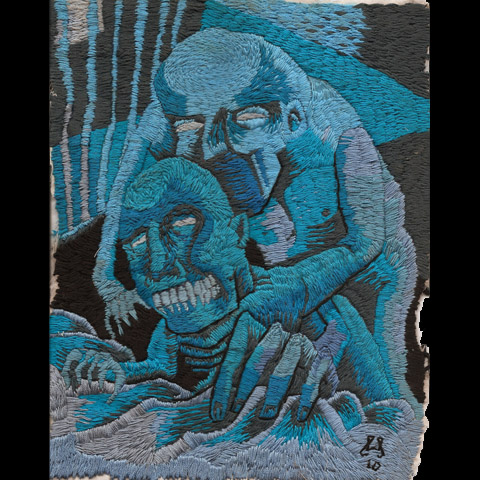 Where do you like to work? There is no one set place. This is part of what I like about embroidering. If the piece is transportable, I will take it with me where I can to work on it. I have done the work in my studio, in bars, in cars,on planes, outdoors, indoors..all over the place really.

I will say, it is often interesting to do this at the bar across the street from me. The regulars will come up, often relating stories of people they have known that have made embroideries, other times just looking puzzled by why a guy in a bar is doing an embroidery. Usually the themes throw them a bit, as well. I remember one time working on an embroidery of a prison rape scene and the bar tender asked me why I was doing that. I responded, “Someone should”. He thought about it for a second and just kind of walked off. So I think I won that discussion.

How do people respond to you as a male embroiderer? As might be expected, the reaction varies. I have seen people marvel (but at that point I don’t know how much it has to do with me being a man) to others kind of laughing at me. But even those who may laugh, tend to step back a bit when they see what is being done. Sometimes out of appreciation, sometimes out of a pure puzzlement at the content.

I used to be the head of security at this night club. We were all having a meeting, and I had brought my embroidery with me to work on during the meeting. One of my fellow security staff started to kind of rib me for working on an embroidery. he said, “My grandmother does embroidery”, in that sort of goofy way that I guess I should have felt belittled being compared to a grandmother. I simply commented how mine did, too, and how I thought my grandmother was really a neat person.

I don’t know what his final thought was, but that kind of ended that there. I also remember one reviewer for a book my work was included in refering to me as a “token male embroiderer”, which cracked me up. I had never been called a “token” anything. 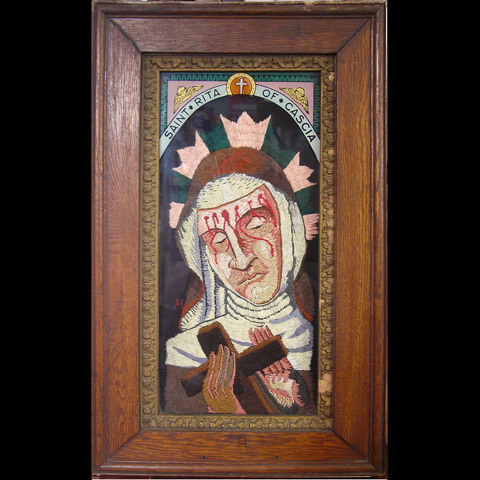 Who inspires you? So many folks..too many to name. In the field of embroidery, I am a bit embarrassed to admit I don’t really know any of the names I probably should.

I look around every so often on the web at other folks embroidering, but I seem to seldom remember their names (I have a horrible memory) if their work has captured me. When I see good work, though, that inspires me to be better myself at what it is I am trying to do. I look through Flickr.com quite often, and one person who has really caught my attention with her work is a gal named Penny Nickels

. But I fear I am so busy with this project or that, I don’t look around at as much art as I possibly should.

How or where did you learn you learn how to stitch or sew? My mom and I used to do things like cross stitching when I was really little, and hook rugs and the such, but mostly I guess you could say I am self taught. This isn’t a source of pride, or anything, I just think of each stitch as a stroke from a pencil, and that directs me as to which way the thread should be going and the like. Sometimes it works better than others. 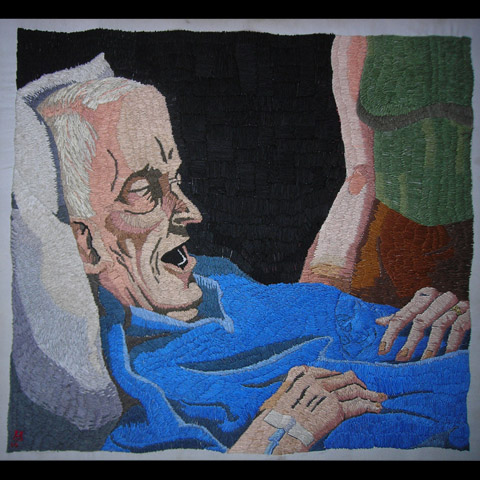 Are your current images new ones or have you used them before? Some of the images I have embroidered were based on other drawings I have done (“Fly me to the moon” for example was also a piece I did as a scratchboard), but mostly the images I create as embroideries are made just as embroideries. That said, I could see other pieces i have done as embroideries, and would be curious to try my hand at them.

How has your life shaped or influenced your work? Mostly by giving me the desire and the where with all to try different things…see what comes of it. I have tried to spend a life observing and asking questions. I hope this shows up in a lot of the work I have done, both embroidery and non-embroidered pieces. I have been super fortunate to be around very creative and supportive people. So much so, that whn I want to try something, the phrase “Why not?” comes up more than anything else .

What are or were some of the strongest currents from your influences you had to absorb before you understood you own work?  If I am understanding the question correctly, the strongest currents come from feeling challenged by things. Whether it be why things happen the way they do in our society, or by my own Christian faith. The latter is why I sometimes find myself doing simpler, more iconic religious figures. They become these things that keep me focused on my faith while I work, reworking questions or thoughts on it. 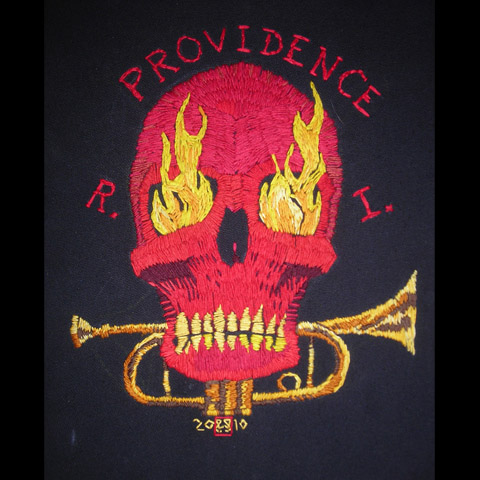 Do formal concerns, such as perspective and art history, interest you? They do, but they only sometimes play into my embroidered work. I tend to be quite happy with distorting things, and find myself doing that even in the imagery I use for the embroideries.

What do your choice of images mean to you? Well, like I said above, with the religious imagery, it is really a sort of meditation on my faith. But with my other imagery, I try to pick things one might not normally see in an embroidery knowing that by doing it as an embroidery, it may stand out even more. Then there are all the patches I have made for different members of The What Cheer? Brigade. A renegade brass band out of Providence Rhode Island. I would do patches for our jackets, and each of those would incorporate some imagery that the member I was making it for felt represented them.

Do you have any secrets in your work you will tell us? I don’t know how good this is to admit, but I used to be a heavy drinker. I have recently had to cut out my intake and let me tell you… I find it a lot more difficult do stitch after stitch without the whiskey. Don’t get me wrong, I still love seeing it all come together, but especially when filling in a large area….I guess my secret was whiskey. It made doing thousands of stitches for 8 hours straight more much bearable. 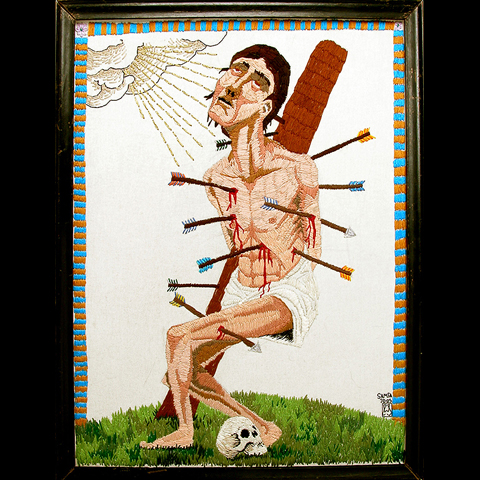 How do you hope history treats your work? I get a kick out of the idea that they even recognize it! If they do, it would be nice to think that they see a sincerity and an earnest attempt to converse with people in it. That said, I don’t think anything about my work is particularly groundbreaking, so I don’t know if I would ever make the history books.

Where can we find you and your work? On the web you can find it at: www.williamschaff.com which will bring you to my flickr site. I am a bit too much of a goof when it comes to knowing how to run and keep updated a regular website, so flickr has proven to be really usuable for me. There is a whole set on flickr of just embroidery at http://www.flickr.com/photos/samsa1973/sets/1247831/