I was going to write a post about Amazon Handmade. It may be the revolutionary step that I have been campaigning for. The thing is, at this point all that there is to know abut Amazon Handmade is that there’s a form to fill out to get information at a later date. There’s much speculation about it all, but truly there’s nothing to know at this moment in time. So I will give it a month and see what happens.

Instead, I am going to post about a couple of artisan suppliers that don’t get all the attention that they deserve from the millinery community: Winchester Hat Corporation and La Mode West. They don’t seem to be on the millinery radar for the simply reason that they aren’t exactly up to speed on the digital side of things. La Mode West has a website that gives you a contact number. (Trust me in saying that the email address it pointless. Use the phone.) Winchester doesn’t even have that. You get one of those weird Manta listings that gives you nothing more than a phone book when you do a search.

To work with these companies, you have to actually pick up the phone and talk to them.

It is worth the effort, even for phone-phobics like me.

I’ve talked about La Mode West before— Richard is the block-maker that lives a few hours from me here in Minnesota. His presentation isn’t slick like the other two block-makers, and his blocks have a quality about them that shows the work he’s put into them with his own two hands. Little rough spots where you can see the file went. Doesn’t affect the shape of the hat, just reminds you that a person made this, not a machine. Recently I was able to acquire a few new blocks: a new fedora in a bigger size, a top hat with a slight flair and a high arch brim for the top hat. 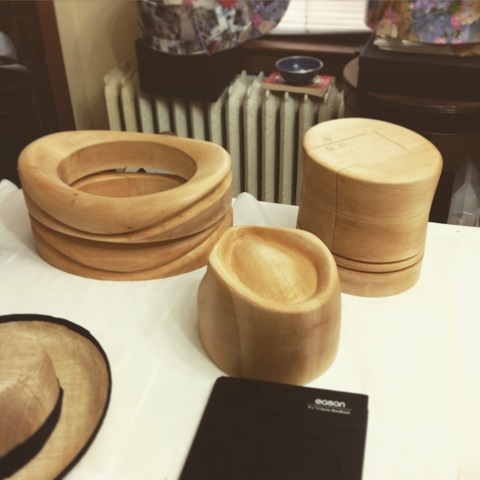 The other set of materials that I recently acquired came from Winchester. I got four felts as sample of what they do: a 100% beaver, 50/50% beaver/rabbit blend, 100% rabbit and a silver belly beaver.  This company makes felts primarily for hatters not milliners. Hatters are an entirely different breed of cat. They are the people that do almost all of the men’s hats using machines and techniques that I have no understanding of at all. This is an art that is as or more intense as millinery. Gigi Gaskin’s HatWrks is a really great example.

The little beaver felt that I have been able to find to this point, I’ve had to import from Germany and it has come in roughly three colors. Winchester makes all of their felt in 30 colors. You can also see just how low tech things are with their sample card. It made me giggle when I opened up the box. 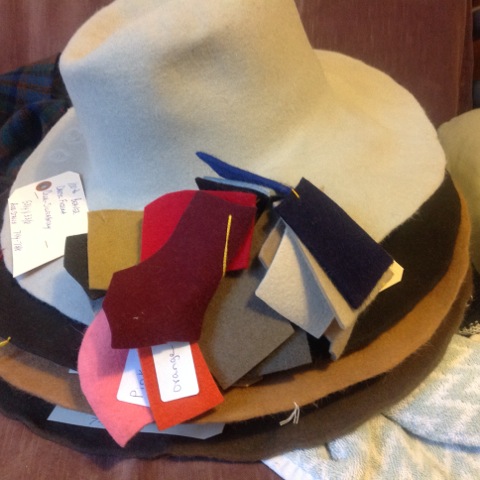 I was worried about using felt meant for hatters. It didn’t resemble the velour felt that I usually use. Happily, I had no problems with the felts at all. No worries. I took some photos of the process I went through to make a top hat out of my new blocks with the silver belly beaver. This felt was a “dress” finish. Super soft. Pliant and sumptuous. The stuff millinery dreams are made of. I have never worked with a beaver felt that was so easy. 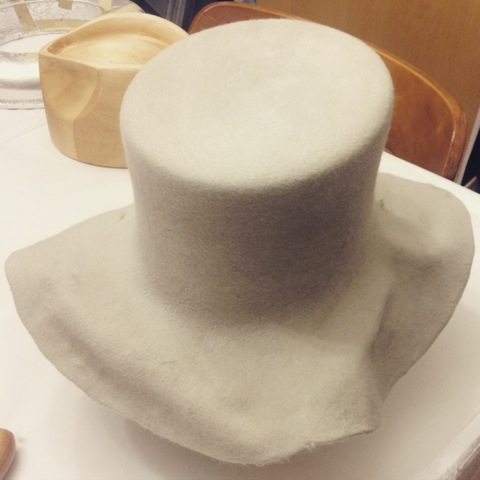 I wanted this felt on my new La Mode blocks. This is how you make a top hat. First you block the crown. 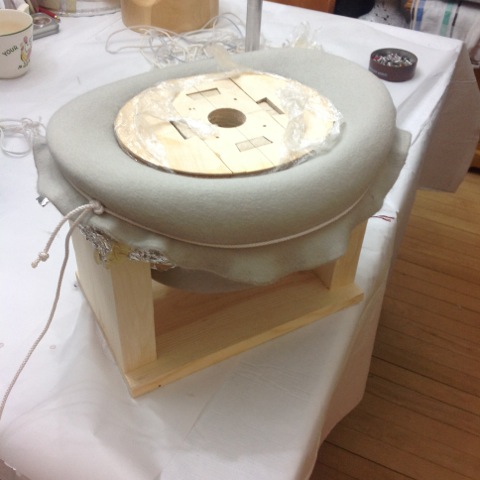 Then I was able to drop the crown into a rather clever device called a flange stand. It allows you to block in one piece. Handy.

Wow that was easy! And the felt. Oh the felt. I could rhapsodize about this felt for hours. Like buttercream frosting…. like ripples in still water…. I can’t use too much hyperbole to describe how lovely this was to work with. 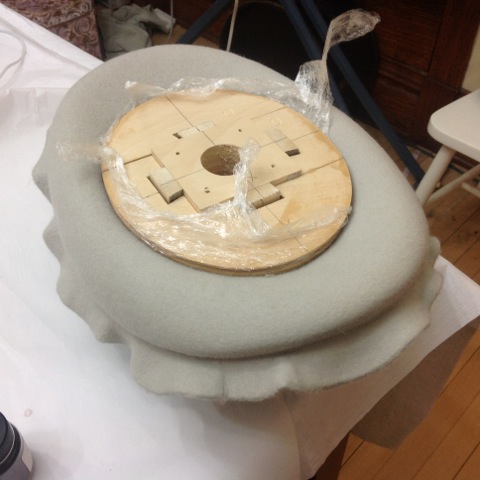 Now the block becomes really important. Because the crown is wide on the top than it is on the bottom, it needs to be a “puzzle block”. Basically, you need to take the block out in pieces so you don’t stretch the base of the crown. Above, you can see the central piece. I give the center a little knock to get it started and…. 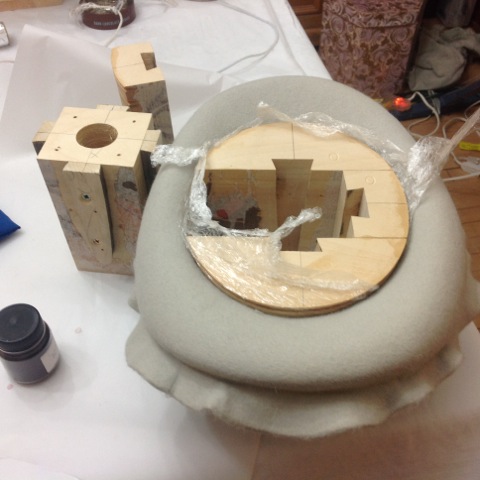 Out come all of the pieces. One by one. 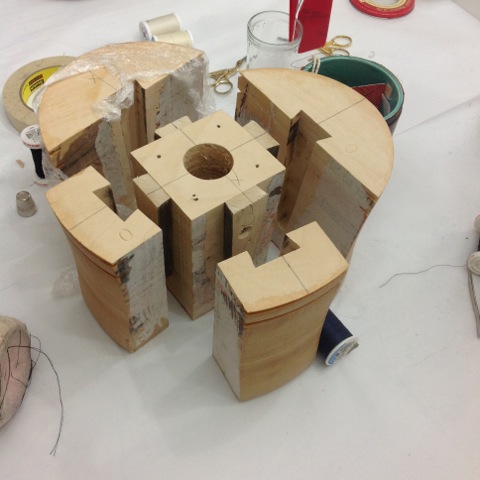 And we now have a fully blocked top hat. 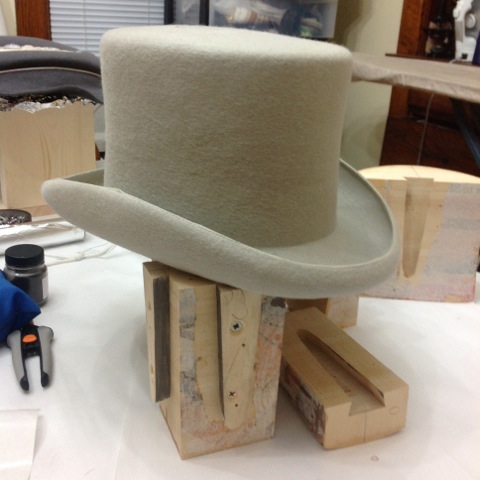 Of course there’s still much to be done, but isn’t it pretty? Doesn’t it just want to go to Ascot? Don’t you just want to pet the beaver?

I’d already made hats out of the other felts I got from Winchester before I got my new blocks. They all came in a “western” finish– something completely foreign to me. They were stiff as cardboard when they arrived but got magically supple in steam. You could not drape these felts, but they do make some extremely beautiful sharp lines.

Here’s a bowler I made out of the 50/50 blend. I distressed the ribbon to make it look like it’s already beaten up. 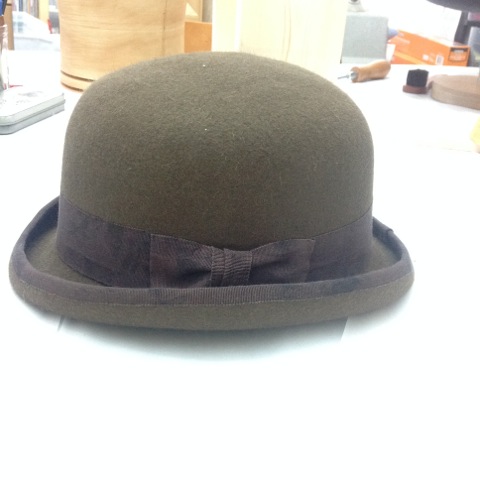 I made another top hat– my straight up stove pipe– out of the 100% rabbit. It’s sort of short so I think it will be very wearable, especially for the ladies. Still not trimmed yet, but you can see the crisp lines the western finish allowed me to get.

And then there’s the 100% beaver western. Another top hat by request. Seems that’s what all the musicians want these days. 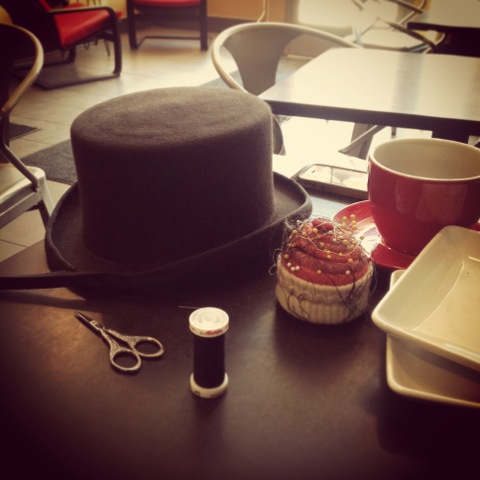 This one came out so beautifully that my husband Adam stole it almost before it was finished! 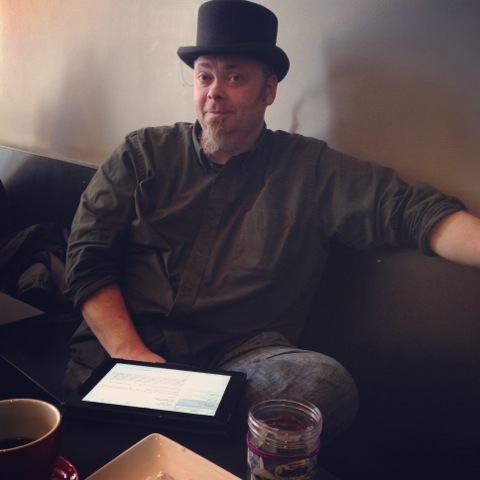 The art of millinery has been around for hundreds of years. Even though we are now seeing a revitalization in the industry, there are still those out there that have been working through the years of hatting drought. These people really know what they’re doing while they are making hats, but they are not necessarily so tech savvy as to have slick websites. It might take more effort to work with them, but it can really be worth it. Pick up the phone and call.